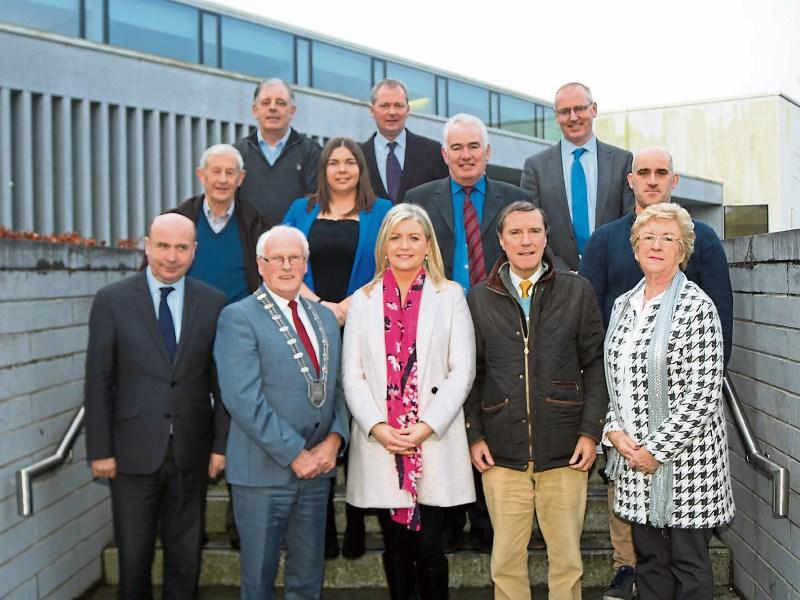 Councillors in the Cappamore-Kilmallock municipal district and council staff with Sergeant Ber Leetch, who addressed the meeting

THE TYPE of gravel in your driveway, a football on the lawn or a pair of wellies outside your door could determine whether your home is broken into or not.

Sergeant Ber Leetch, crime prevention officer at Henry Street, offered a range of insights at a meeting of the Cappamore-Kilmallock municipal district. She was there to inform councillors and promote a public crime prevention meeting in the old convent in Bruff on Tuesday, February 12 at 7.30pm.

Speakers will include Sgt Leetch, Seamus Sherlock, of the ICSA and Life after Debt campaigner, and Patrick Fitzgerald, psychotherapist with My Mind. Bruff Superintendent Brian Sugrue and gardai will also be in attendance to speak to attendees.

Sgt Leetch said apart from physical harm the biggest crime on a person is somebody entering their home. And the statistics show that in one out of six cases entry is gained through an open window or door. Sgt Leetch said there was a spike during the heatwave last summer due to people leaving their windows open during the day. The long-serving garda couldn’t stress enough – lock your doors – even when you are home.

“There are cases of criminals trying doors to see if they are unlocked. If the owner comes out they say they thought they were in such a house and talk their way out of it. Always lock you doors,” Sgt Leetch.

And if a burglar does get in, the scene of crime officers say they target the main bedroom, kitchen and hot press.

”Cash and gold is what they are after. Never keep cash in the house,” said Sgt Leetch.

So what is the best way to make your home less attractive for thieves? The crime prevention officer said a survey of prisoners showed that a sign of occupancy is the biggest deterrent. Even more so than a guard dog.

“No burglar wants to get caught. Can your house be seen behind the wall or hedge so a neighbour can see suspicious activity? Buy a timer so your lights come on while you are out. Leave the radio on. Buy a house alarm. If you love it, lock it up and light it up,” said Sgt Leetch.

She said criminals scouting your house will even consider the crunch made by your gravel. A football or toys left on the lawn implies there are children in the house. Sgt Leetch said burglars might think twice as parents with young children pay more attention to noises during the night.

While a pair of size 10 or size 12 wellingtons outside the door gives the impression there is somebody in the house.

“These are all signs of occupancy,” said Sgt Leetch.  Cllr Mike Donegan told the story of a friend of his ringing him.

“I asked him how did he enjoy his holiday. He asked, “How did you know I was away?” I had passed by his house and his gates were closed. They are always open,” said Cllr Donegan.

Cllr Brigid Teefy spoke about the elderly couple in Caherconlish whose home was broken into while they were at Mass two weeks ago.

“There is a lot of worry in the area,” said Cllr Teefy.

As well as the talk in Bruff on February 12, Sgt Leetch said she is happy to do talks with any size of group in the county or city.