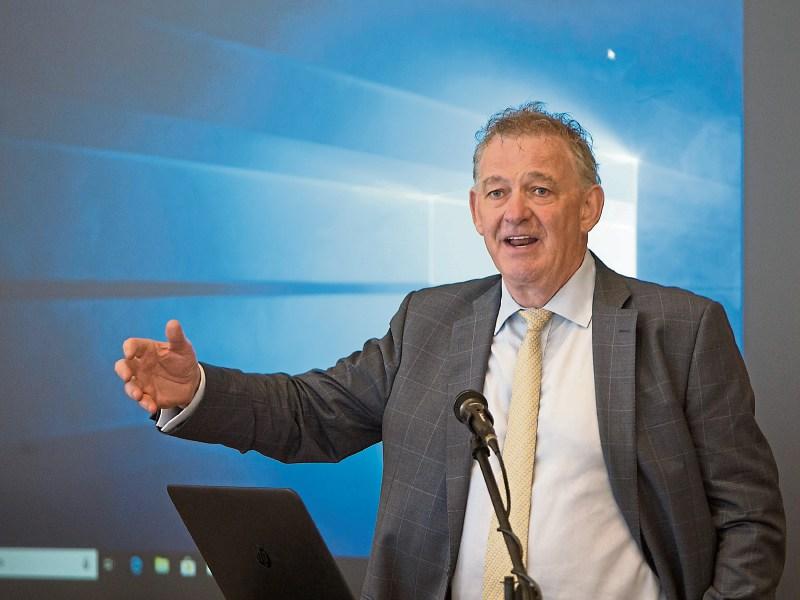 PETER Casey, the controversial candidate in the recent presidential election, has come out in full support of a ban on election posters, a proposal made earlier this month by Newcastle West councillor Michael Collins.

Using the form of communication best-loved by President Trump, Mr Casey tweeted at the weekend that he “totally” supports Cllr Collins’ proposal “to ban posters in all future elections”.

But continued the outspoken businessman: “Apart from pollution, anyone who is influenced by a poster should not be allowed to vote”.

Totally support Councillor Michael Collins in his proposal to ban posters in all future elections! Apart from the pollution, anyone who is influenced by a poster, should not be allowed to vote! Posters did not work so well for SF in the Presidential election.

Speaking to the Limerick Leader this Wednesday, Mr Casey, who won 34% of the vote in Limerick County and 23% in Limerick City in the presidential election, confirmed he did indeed mean this.

“I do, of course,” he said. “If you are so fickle in your ideas, in your beliefs by a picture of somebody, that is not really what a responsible voter should be. It is a bit like knocking on somebody’s door at night. If somebody knocked on my door at night, they wouldn’t get my vote.”

“I don’t think people are influenced by posters,” said Mr Casey, who did not use posters in his bid for the presidency last year.

And he pointed out that posters didn’t help Sinn Fein in their presidential campaign.

“There are lots of ways of getting your policies across rather than polluting the environment,” he said.

Social media was one way, he pointed out, or local radio. But he continued, he refused to pay for social media during his presidential campaign although people were advising him to spend on advertising.

“I didn’t pay for social media,”he said. “Maybe if I had I would have won.”

But he said he had made no decision on whether or not he would stand in the local elections or European elections in May.

“All I know is I have to make sure I have my wife completely on board. We haven’t made any final decision,” he continued.

If he were to stand, he added, he wouldn’t start his campaign until after St Patrick’s Day.

Meanwhile, Fianna Fail’s Cllr Michael Collins has said his proposal to ban election posters is gaining traction locally and nationally, both among voters and politicians and on social media.

“There is a lot of support for it,” he said. “People don’t see the need for them at all. There has been no negativity.”

He is now looking forward to discussing it at the council’s Environment Strategic Policy Committee meeting next month and hopes to bring the proposal before a full council meeting in March and get its backing.

“If they do they do. If they don’t, they don’t. At least we have done our bit at local level.”

The six Newcastle West councillors have already agreed they won’t put up posters in any part of their Municipal District. Cllr Collins proposed the ban primarily on pollution grounds but also on safety grounds.

“It is a national issue and I hope it will be taken up nationally,” he added.