Mayor of Limerick presented with Dolores O’Riordan and Cranberries memorabilia 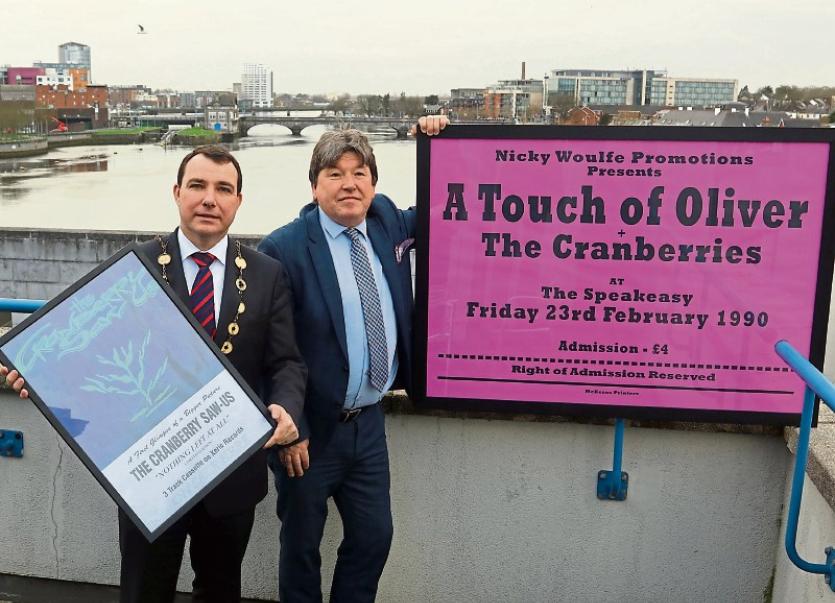 A PERMANENT reminder of the legacy of Dolores O’Riordan is to take pride of place in the mayor’s office at City Hall in Limerick.

To mark the first anniversary of the passing of Dolores O’Riordan, Mayor James Collins this week received a special presentation from music collector Nicky Woulfe.

Nicky presented a poster from one of The Cranberries and Dolores’ early gigs in Limerick, and a 1993 photograph from the time the band were signed to a major record label, Island Records, which was taken by former Limerick Leader photographer Dermot Lynch for the newspaper at the time.

Both the poster and the photograph are from the Music Memories and Memorabilia collection, Nicky’s personal cache of local and international rock and roll treasures, which he hopes to open as a  permanent visitor and tourist attraction in the city.

Mayor Collins said he was delighted to receive the memorabilia.

“We here in Limerick are so proud of The Cranberries and all they achieved as international stars. But despite the magnitude of their success they never forgot their home place. And while we are all saddened by Dolores’s death, her great gift of music will live on for many generations,” he said.

Nicky Woulfe said the posters and photograph from 1993 were a reminder of the long and successful career the band had since their humble beginnings performing in the city, and he wanted to make sure they were shared with the people of Limerick to mark the first anniversary of Dolores’s death.

“Despite sales of forty five million albums they were essentially of Limerick and spoke of their city across the world. The Presentation to Mayor Collins as the first citizen will ensure that the message of their wonderful music and where it all began takes pride of place at City Hall.”