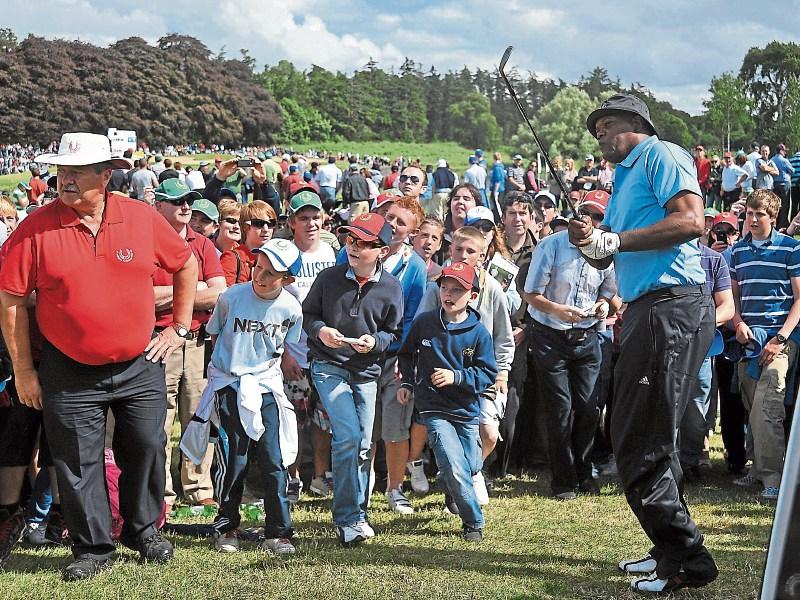 Will he be back in 2020? Samuel L Jackson, along with supporters, watches his chip onto the 15th green during the JP McManus Invitational Pro-Am in Adare Manor in 2010 Picture:SPORTSFILE

ONE of the world’s most famous actors, Samuel L Jackson, has spoken about his desire to return to Limerick.

The American actor, nicknamed ‘Mr Cool’ has described his love of Ireland and admitted he wants to return to Limerick for a round of golf.

The Pulp Fiction star was, of course, one of several major superstars from the world of sport and the big screen to descend on Adare Manor in 2010 for the JP McManus Pro-Am.

"I wish I knew. If only I could tell you,” Mr Jackson said when asked in recent days if he would be returning to Ireland.

“I've had great times in Ireland. I've also been the sickest that I ever was in my life in Ireland too. Food poisoning from some bad oysters, but I want to go back to Limerick and play that course again," he added.

The iconic actor was speaking to Joe.ie ahead of the release of his new movie Glass on January 18.

The next JP McManus Pro-Am, which promises to be the most star-studded golfing tournament of the decade, will take place on July 6 and 7, 2020 at Adare Manor.

In 2010, many of the world’s best golfers, including Tiger Woods and Lee Westwood, lined the fairways for the event, hosted by the new owner of Adare Manor, JP McManus.

As well as Mr Jackson, Hollywood A-listers Hugh Grant, Michael Douglas and Catherine Zeta-Jones were also in attendance for the 2010 tournament.