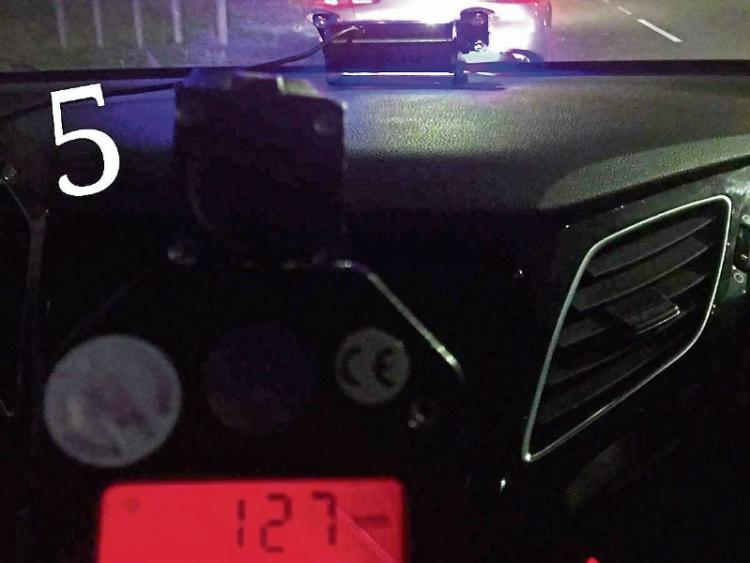 A court appearance is due for careless driving for this motorist who was driving at 127KPH in a 60KPH zone approaching a roundabout Picture: Garda Facebook

A MOTORIST is facing prosecution before the courts after they were caught speeding while approaching a roundabout on the outskirts of Limerick city.

Details of the incident, which happened over the weekend, were revealed by gardai in a post on social media.

It is alleged a saloon-type car was detected by members of the Roads Policing Unit while travelling at 127km/h on the Tipperary Road while approaching the roundabout at Northern Trust from the Boher side.

The speed limit in the area is 60km/h.

Gardai have confirmed the driver of the car was subsequently arrested and charged with careless driving and is due to appear before the district court in the coming weeks.

Under the Road Traffic Act, any motorist convicted of careless driving in court faces the possibility of being fined or imprisoned.

A disqualification can also apply and in cases where a driving ban is not imposed, the offence attracts five penalty points.

The incident is the latest involving vehicles driving at high speed in residential areas around Limerick.

A number of serious speeding offences have also been detected in recent days on sections of the motorway network around Limerick.

Gardai are appealing to motorists to slow down in an effort to reduce the number of serious road collisions in Limerick.

Last year, there were eight fatalities on Limerick roads.