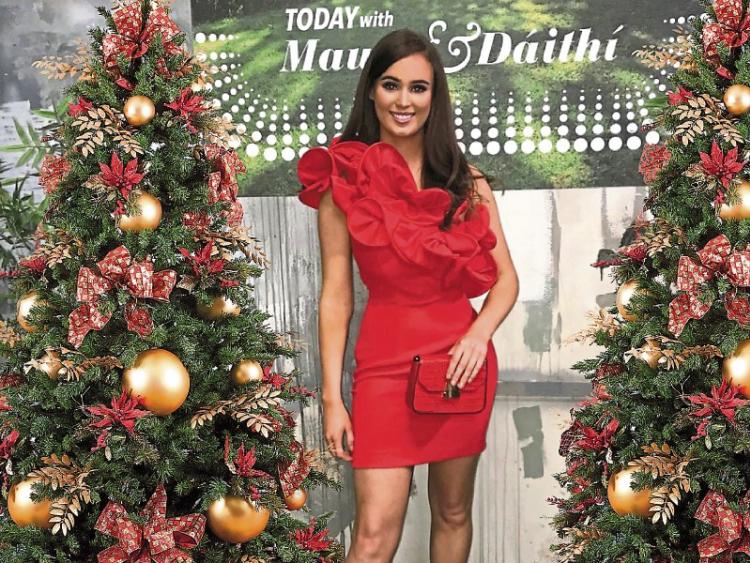 Miss Limerick, Beibhinn Haren says Christmas is a time for the family

I remember the best toy I got was the Sylvanian House that I got when I was around eight years old. My best friend Emma also got one and we’d carry the huge houses, with all the tiny tiny pieces of furniture back and forth to each others houses, and set up the houses as neighbours. After hours of setting it all up, we’d take it all apart and start again some other day.

I love that Christmas is a time for family. Christmas is the one time of year when everyone is off college and work and are relaxed and in holiday mode.

For me I don’t finish my exams until December 20, so I plan on spending most of the holidays at home with my family before I go back to UCC.

As much as I fondly recall getting an Atari console when I was 10, the best Christmas present I can remember was one that came a few days late, on January 6 2010.

We got snow that Christmas - on one day over the festive period it hit minus 15 degrees. I remember keeping one eye on the weather and the other on my heavily pregnant wife. Only for it being Christmas Day, she wouldn’t have been discharged from hospital, where she was being kept under observation, pending the imminent arrival of our fourth child.

I was at home with the other three children and managing the family bar also. Santa was under pressure that year too. That's when you appreciate how special grannies are.

Eileen was let out for Christmas Day and back in on the 26th. My daughter,Beibhinn, was born on January 6 2010. Little Christmas.

Eileen's mum passed away a few months later. Now, every year, we get up early for Santa’s presents, and then go to Mass in Crecora with Eileen's family. Her mum is buried there.

My mom and dad come to visit us every Christmas morning to see what Santa has brought.

My parents ran the Railway Hotel so I remember my childhood Christmas being all hands on deck. My job was collecting the empty glasses and emptying the ashtrays. This was well before the smoking ban. I remember the stink of second hand cigarette smoke. We would go to midnight Mass at the Redemptorists. I loved having a hack of the Christmas ham when we got home.

On Christmas morning my parents would invite friends and neighbours to our house. Many a turkey burnt because of that legendary Christmas Day party. St Stephen’s Day was usually spent at the Limerick races in Greenpark with my uncle Mossie, always good for a few tips. Turkey and ham sambos when you got home. Now, we run a bar and restaurant so Christmas Eve can be a late night. Each Christmas, I cook dinner at home with Eoghan, Thomas, Daniel and Beibhinn. I'm usually asleep on the couch in front of the fire late evening. Every Stephen’s Day I play a soccer match in Mungret with all my old neighbours from Dooradoyle estate.

Every Christmas was memorable in our household as we lived above a pub. Mam went all out and would pack the Christmas tree with presents. As kids we would wake at the crack of dawn and there was eight children so it was a mad house. My parents worked 365 days of the year so having Christmas Day was one of the few times the family would actually all be together to eat a meal as someone was always wo rk i n g ! In the morning the regular customers would all come for a drink and then Dad would get them all to leave so the family could have that special dinner together. Then after dinner we would watch movies together and play games. This was our only day of the year as a family to do this so I really cherished Christmas Day.

IN 1998 at 4am my middle brother Sean woke Diarmaid and I. Being the youngest, of course, I was nominated to go in and ask our parents could we go downstairs. Eventually after much pleading, at 5am they gave in. Dad had the video recorder rolling as we ran down the stairs. I ran straight to the giant Medieval play castle inside the living room, and my brother ran to the play kitchen. In fairness, Sean always wanted to be a baker. I’m not sure what my excuse wa s ! We spent the morning playing with each other’s presents before getting ready to visit my aunt Jacinta’s house then continue to my nana Mary’s house. We arrived home at lunchtime to the smell of turkey, ham and my dad's famous croquettes. Getting to open more presents from family after dinner was and has always been my favourite tradition. It was a Christmas we’ll never forget!

Daniel Butler, Mayor of the Metropolitan District of Limerick

Christmas is certainly a significant time in our family lives. The gifts we get play a big part and tell us a lot about who we are and who we were. I remember when I was 12, a defining time in all our lives, when I got a double deck Magnavox tape player and radio. I thought I was The Man when I got it, to have the double deck. It allowed to me to copy tapes and music off the radio, the height of my criminal years! The tape I got to go with it was Michael Jackson’s album Dangerous which was just out for Christmas. Up until then I was dependent on music on the radio and TV. For me as a now huge music fan that was a pivotal moment in my love affair with music that continues to this day.

The other more humorous memory I have is late one night I heard a racket on Christmas Eve of what sounded like two men trying to get something through the front window. Thankfully, as a seven-year-old I made myself go back to sleep in case it was Santa and I wouldn’t get my present. It turned out years later it was in fact my father and his friend trying to sneak my bike in through a small bedroom window. They may have had one or two at this point and probably thought they were in Mission Impossible.For the life of me I  can’t understand why they didn’t just bring it in the front door down the other end of the house! But it’s a memory I cherish and often laugh at.

Let me take this opportunity to wish all the Limerick Leader readers a most special Christmas and a new year filled with health, hope and endless opportunities.