The best Christmas present of all arrives in County Limerick school 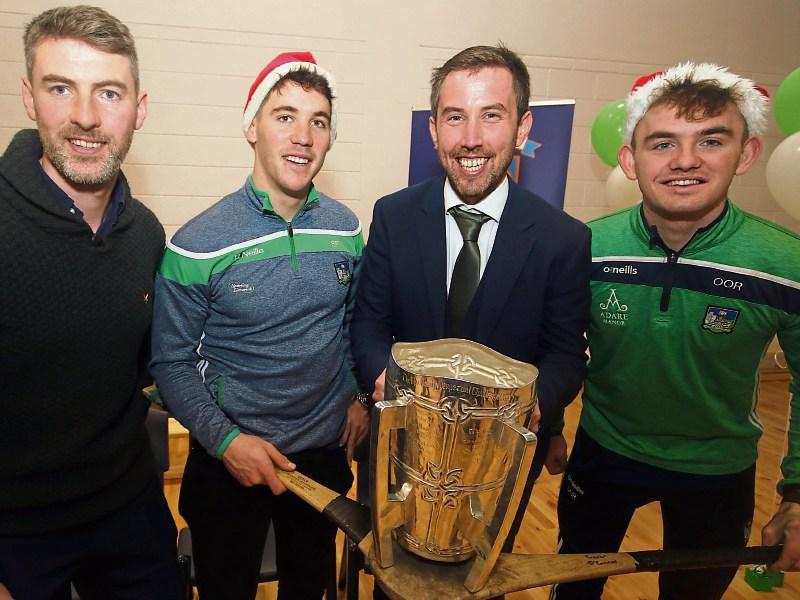 THE BEST Christmas present of all landed in Coláiste Iósaef Community College in Kilmallock on Monday afternoon when Limerick hurlers Sean Finn and Oisin O’Reilly visited with the Liam MacCarthy Cup.

The excitement had been building in the school from early afternoon with the 450 students  and invited guests sitting in the PE hall waiting for their homegrown heroes to arrive. The sound of bagpipes building along the school corridor signalled the arrival of Sean and Oisin, two past pupils of the school.

The hurling stars and the cup were led into the new PE hall by Ms Siobhan Bailey and her sister, Roisin, two accomplished bagpipe players.

“It was a special moment welcoming back two former students who had achieved such wonderful success this year with the Limerick hurlers,” said school principal Noel Kelly.

Once settled in both players gave a very interesting and honest account of their year and the trials and tribulations involved in winning the Liam MacCarthy. This interview was conducted by Mr Ger Barry, a teacher in the school and an avid follower of Limerick GAA. In fact, Mr Barry is involved with mentoring and coaching some of the county underage teams for the past number of years.

Sean and Oisin were both loud in their praise for all involved in the team’s success this year, from John Kiely right down to the people that helped out at the various training sessions and matches throughout the year. Conor Hanley Clarke, a fifth year student in the school, was recognised at the event for his role with the team over the course of the year and the school and Sean Finn made a presentation to him to recognise his involvement with the team.

The school was delighted to showcase its new facilities and had postponed the visit to allow the entire student body attend the magical moment.

The school choir sang Limerick You’re A Lady and concluded the afternoon with a rendition of Dreams by The Cranberries. The school trad group also played a number of tunes.

“Our school has three important values, respect, trust and effort,” said Mr Kelly, “and both Sean and Oisin have embodied these values along with all involved in the 2018 success. It is important for our students to see that these values aren’t just restricted to school, but are values that will serve you all your life,” he added.

“Hopefully we will see Sean and Oisin back again next year with the Liam MacCarthy along with some other former students who will hopefully make names for themselves in the 2019 campaign.”