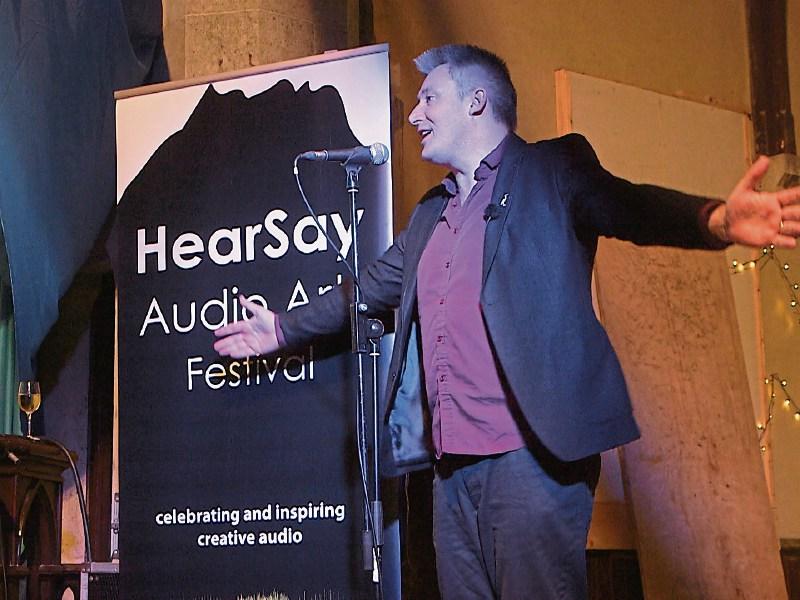 Diarmuid McIntyre, director of the HearSay International Audio Arts Festival in Kilfinane, says there isn’t another festival like it in the world

DIARMUID McIntyre, director of the HearSay International Audio Arts Festival in Kilfinane, made an impassioned plea for support at a Cappamore-Kilmallock municipal district meeting.

He said there is a “massive imbalance” in the council’s arts funding in the city compared to the county.

“We have got very little funding from the council. Every time we jump through hoops for funding the hoops are moved. Our American sponsor has pulled out. We cannot afford to run HearSay. I love it and it’s going to die,” said Mr McIntyre.

In a presentation to councillors, Mr McIntryre said there isn’t another festival like it in the world. The first HearSay took place in 2013 and is held every two years. The fourth event is on from April 4 to April 7, 2019 in Kilfinane.

HearSay sees some of the finest audio makers take over the mountain village. It is described as a unique coming together of two communities, the international creative audio community including radio feature producers, film sound designers, sound artists, audio fiction makers and podcasters – and the south Limerick community. Contributors share their work with one another, sharing, listening, giving and getting feedback.

Contributors include Oscar, BAFTA, PPI, Prix Italia, and Emmy winners and they are made feel at home by locals. There is 92 events over four days in 19 venues. One slide showed renowned chef Kevin Thornton doing a piece with David Attenborough’s sound man.

The economic impact in the rural community with just over half the attendees coming from abroad is massive in the village and all over south Limerick. There was 604 bed nights in 2015, 1,064 in 2017 and 1,880 expected in 2019. Socially he said the festival gave confidence to a village that was “dying”.

“HearSay has the potential to be rural Limerick’s Eva International,” said Mr McIntryre.

HearSay received no City of Culture funding, he said.

“The council and Creative Ireland’s combined support for the first three editions of the festival has averaged less than €3,000,” said Mr McIntyre.

Speaking after the meeting, Mr McIntyre said in their 2019 national Arts Council application, HearSay was the highest scoring application submitted in its category.

“This was the basis of our festival application to Limerick City and County Council’s open call, along with our business plan to make HearSay year round and sustainable. HearSay received the lowest funding allocation over the strand c application.

“It received €10,000 - the minimum amount for a successful application for that strand. This was lower even than LEAF, a brand new festival for the city.

“There was an allocation of €10,000 to nine festivals in strand b - the maximum amount that could be allocated. Eight of these nine were city based,” he said. The €10,000 that HearSay received works out at 1/300th of the operation of the council’s arts programme budget or 1/62nd of the festivals budget, he said

Sheila Deegan, arts officer with the council, said there was an assessment panel and “we have to honour that”.

“That was the decision made,” she said. Ms Deegan said they are working closely with Mr McIntyre.

“Their success is obvious – it is a flagship festival. We are working to support him in lots of ways. We have expertise in marketing and communications in the council,” said Ms Deegan.

Cllr Lisa Marie Sheehy said she was “completely embarrassed” at the end of Mr McIntyre’s presentation.

“I just live down the road. It is an amazing festival. it brings the whole community together. We can’t leave something like this die. We are always talking about rejuvenating rural Ireland. As a municipal district we need to be sticking up for our festival. We are always beating the drum of the city v county,” said Cllr Sheehy.