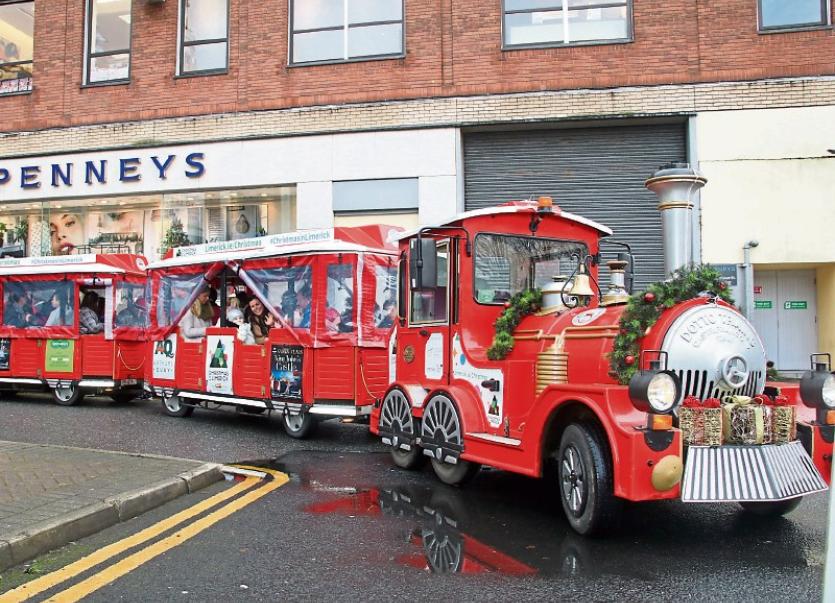 LIMERICK city centre visitors will no doubt over the last few weeks have seen a jolly-looking train chugging around, providing joy to adults and children alike.

The red mock-steam train has a rich history, being built in Venice, before taking in Dublin and even Llandudno in Wales, from whence it came to these shores.

The Limerick Leader joined driver Michael Place on one of its 20 to 30 minute runs through the centre.

’Toot toot’ and ‘honk honk’ was the call as wide eyed children excitedly boarded the train.

“The joy of this train is not the facts and figures. It’s the fact you can show your friendliness. This is a half-hour of escapism. But we are primarily here to boost the commerce of the city.

“Coming into Limerick you need that extra lure, and I guess that’s why the Chamber and those involved in the council got the money together for this,” Michael said.

The Malahide man beamed: “I’ve had the warmest welcome ever!”

The beauty of the train is that it is free to use, with the public having the chance to make a small donation to St Vincent de Paul in return, should they desire.

Some 36 adults, with children on their laps can be taken on the route, which takes in Arthur’s Quay, O’Connell Street, Henry Street, Harvey’s Quay, the Hunt Museum, Nicholas Street and King John’s Castle.

As we pass a group of carol singers from Birdhill National School in O’Connell Street, Michael says they will be his next passengers.

He had promised to take them all out to reward them for their musical efforts.

“This is a wonderful classic Italian road train. It’s designed for children, the aesthetic look makes them say they want a ride in it,” he said. “It’s a classic style, it’s handcrafted and sold all over the world. We’re lucky to have it.”

Designed just outside Venice in Italy, Toots the train was taken on by the Isle of Wight council.

After 10 years, the island off England’s south coast decided they no longer wanted it, and it found its way to a second hand rail sale in Wales – which is where Michael set eyes on it for the first time.

Michael remembers driving it off the ferry at Dublin Port to the bemusement of gardai, who afforded him an escort to Malahide, where the train serves most of the year.

”They were only five minutes escorting me up the road until they realised how fast it went, so they said ‘sod this’, and they gave me a wave off,” he laughs.

The Dublin village has plenty of famous residents, and Michael says many of them have joined him in the front seat, including Westlife star Nicky Byrne, RTE’s Marty Whelan, and rocker Bryan Adams, alongside his wife Alicia, when he was playing Ireland.

The most notable visitor, however for Michael came in the form of the late, great Dolores O’Rioran, who he recalled sang ‘What’s new pussycat’, along the “Cote D’Azur of Malahide seafront!”

Toots the train is going to be in Limerick until this Sunday, December 23. Get on board if you have a chance.