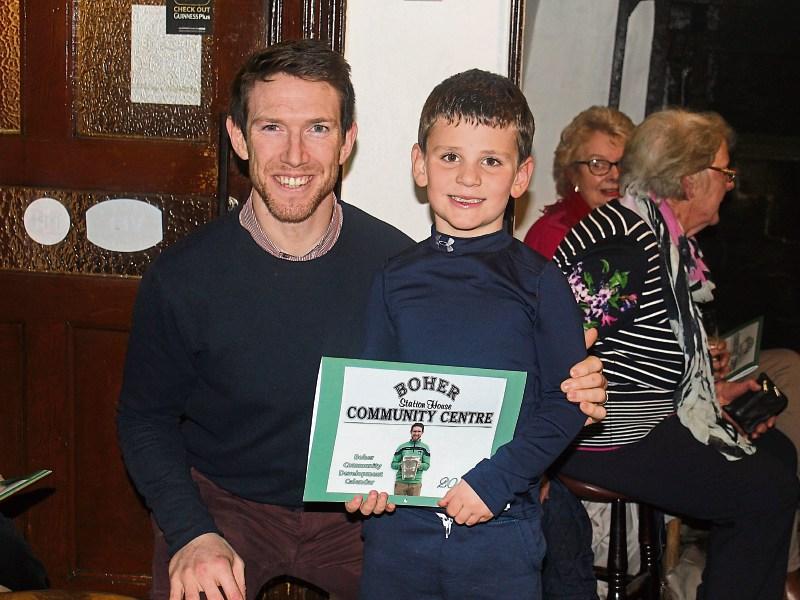 THERE really was no decision to be made regarding the subject of the front cover of Boher’s 2019 calendar said committee member, Gráinne Keays.

It had to be their own Seamus Hickey holding the Liam MacCarthy Cup. The launch of Boher Community Development Association’s (BCDA) calendar was hosted by Jerry and Mary Ryan in O’Neill’s Bar.

“The committee was delighted to get Seamus Hickey for a lunchtime photo session with the cup outside the community centre. The resulting shot of smiling Seamus with the cup forms the distinctive cover.

“Seamus together with his proud parents, Sean and Geraldine, were at the launch, and Geraldine was heard to say that Seamus has ‘had that smile on his face since August 19’,” said Gráinne.

Pat O’Connell, chairman of BCDA, praised the calendar committee of Helena Hickey, Alice O’Connor, Mary Finucane Ryan and Gráinne. He thanked those who submitted photographs and other memorabilia for inclusion and “without whose generosity the calendar simply would not be possible”.

There is a superb mix of photos from 2018 and days gone by. It includes a snow scene from when the Beast from the East took hold in March. Caroline Hickey took a dramatic photo of a train stopped on the tracks outside the community centre, formerly the train station. There has been many a calendar produced since a train stopped in Boher. The late John Finucane – the only person from Boher to be cathaoirleach of Limerick County Council – is honoured. A big talking point was one of the late publican Pa McGrath with his sister, Mary Power, in front of an old-fashioned dresser laden with a truly beautiful array of tableware. These are just a few of the photos that grace the pages.

The calendar is on sale at all local outlets in Boher and Murroe and from BCDA members, priced at just €5.