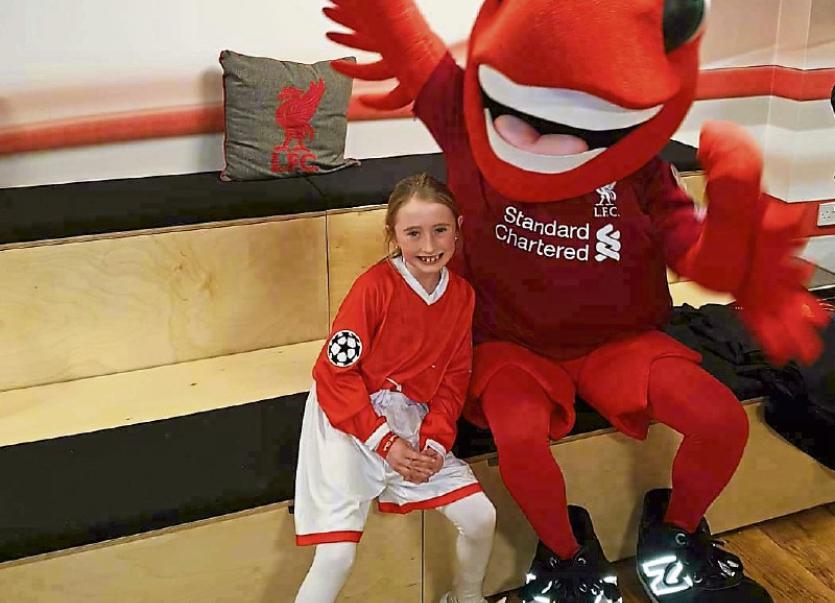 CIARDA WALSHE achieved her dream of watching her beloved Liverpool at Anfield for the first time last year.

Last week another dream came true for her when the young ‘Kopite’ marched alongside the red giants.

Ciarda, from Castletroy, was already anticipating a special night on Tuesday to witness Liverpool’s win over Napoli in the Champions League.

However, after arriving early to soak up the atmosphere, when the third-class pupil of Milford National School posed for a photograph next to the statue of legendary manager Bill Shankly, Ciarda was given an opportunity she couldn’t refuse.

Ciarda’s father, Jason began: ”We were by the statue we asked fans near the stadium to take a photograph, and a lady that worked for Liverpool came over and said that was a lovely photo.”

Ciarda continued: ”She then asked me if I was available to be a mascot and I said yes.”

The invitation took the pair inside the hallowed grounds, where Ciarda was given a goodie-bag, her mascot kit she got to keep and a photo with Liverpool’s mascot The Mighty Red.

“I was a bit nervous not being with her in the tunnel on her own, but it was very professional and organised,” Mr Walshe recalled.

After the rehearsals in her mascot kit which she got to keep. Ciarda led her heroes to their European clash alongside referee Damir Skomina.

Behind her was Andrew Robertson with his captain’s armband and further back she spotted The Normal One Jürgen Klopp and the elite Egyptian himself, Mo Salah, her favourite player.

Only a select few can say they wore the red and walked under the This is Anfield sign where the floodlights of a Champions League game awaited for their arrival.

Forever-Red Ciarda recalled: “I was very surprised, it was so loud, and there was such a great atmosphere.

“It was the best time of my life,” she added.

The good times kept on rolling for the Aisling Annacotty youngster, as she and her father watched Mo Salah score the winner to ensure Liverpool’s qualification to the last 16.