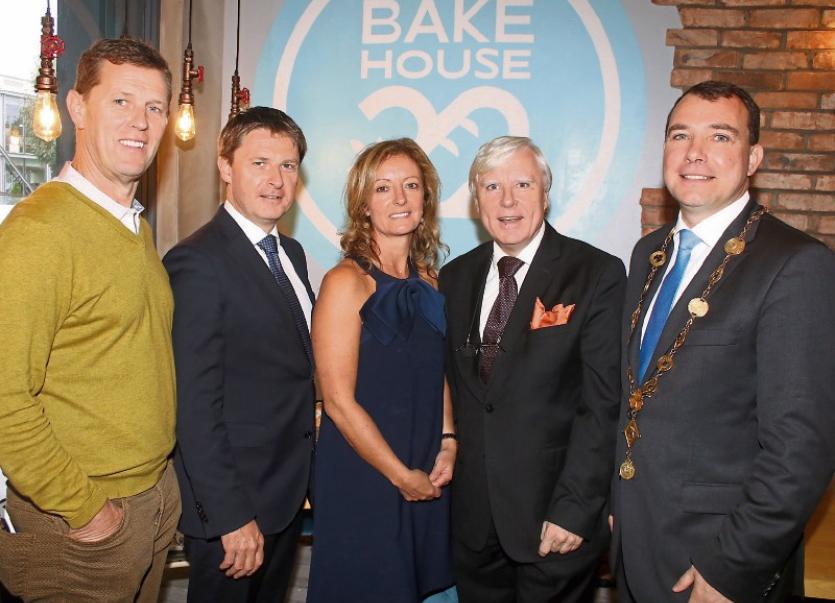 John and Francis Brennan with Michael Tracey, Sheelagh Tracey and Mayor James Collins at the official opening of Bakehouse 22

THE owner of a Limerick business which is to feature on the popular At Your Service TV programme has been prosecuted over construction work which took place late at night – days before the grand reopening of the revamped premises.

Limerick City and Council has initiated proceedings against Michael Tracey over his failure to comply with the terms of a notice which was served on him under the provisions of the EPA Act.

He told solicitor Gerard Reidy he received complaints from a number of residents who live in apartments above the premises on October 8, last.

He said the complaints alleged there had been an increase in noise associated with the renovation works “in the evening and at night-time”.

After efforts to contact Mr Tracey failed, a formal notice was served on him the following day requiring him to cease all heavy construction work between 7pm and 8am.

Mr O’Grady told the court he was aware that TV personalities and hoteliers John and Francis Brennan were due to perform the official opening of the new Bakehouse 22 premises on October 12 and that the opening would be televised.

To that end, he said the notice specifically stated that light works such as painting, plastering, plumbing and vacuuming would be permitted out of hours.

The engineer told the court the residents kept ‘comprehensive logs’ and video of the works which continued for a number of days after the notice had been served.

The matter before the court relates to breaches of the order on October 11 and October 14.

By way of explanation, Solicitor Sarah Ryan said her client was under pressure to meet a deadline which had been set by the producers behind the RTÉ series, which regularly attracts hundreds of thousands of viewers.

She said the builders were informed of the date for the opening of the revamped premises which led to some work being carried out in the evening time.

“They were doing the work in the context of pressure from other sources,” she said.

Ms Ryan said Mr Tracey accepted he did not respond to emails from Mr O’Grady as he could not access his phone or email while working.

“It was all hands of deck to try and get as much work done as possible...he was getting down and dirty to get the work done.”

Ms Ryan said her client “does not like unhappiness” and that he regrets what happened.

“His neighbours are also his customers, it was an error not to have notified his neighbours in advance,” she said.

The solicitor said Mr Tracey would pay the costs and expenses of the local authority but asked that a formal conviction not be recorded in the circumstances.

When asked, Mr Reidy said he had a “neutral” attitude to the application.

Noting that some works have yet to be completed, Judge Marian O’Leary adjourned the matter to January 4.

The programme featuring Bakehouse 22 is due to be broadcast in April.