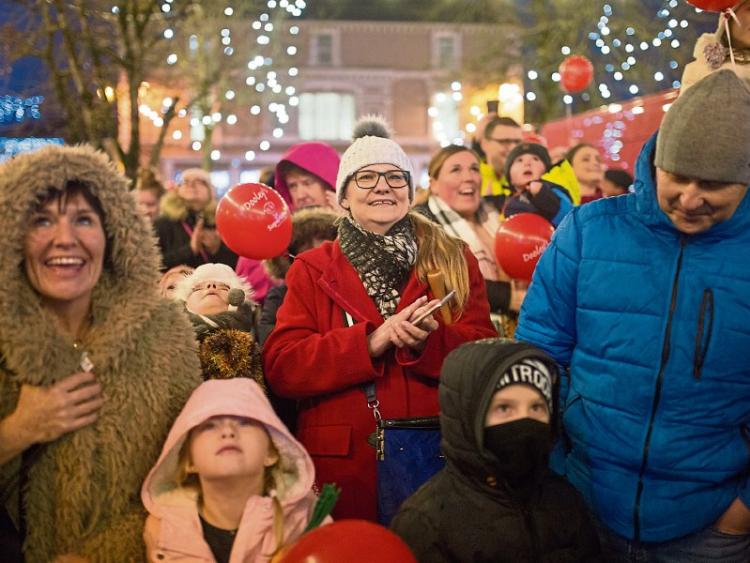 BLUSTERY winds and rain accompanied the switching on of the Christmas lights in Newcastle West at the weekend.

But the bad weather failed to deter the optimistic and the stout-hearted who were determined to raise a cheer for December 8, the day that so many still regard as the real beginning of Christmas.

It was, by any measure, one of the fastest switching on ceremonies in the history of Christmas. But also one of the cheeriest. The young carollers from the Desmond School of Music sang out from under their hoods; others took shelter under market stalls and Santa and Mrs Claus made a quick dash across from their Grotto in the Castle.

After a rapid count-down, the red balloons went up, the lights went on and a collective sigh of satisfaction escaped as the town was magicked into something very special. Christmas was now, definitively, on in Newcastle West.

And it comes with continued visits by Santa Claus to the grotto and two hours extra free parking every afternoon, as the local business association has reminded everyone. Shop local, is the message and this year it is more important than ever.

Meanwhile, Glin is gearing up to welcome visitors to their very special Christmas in Glin festivities this Sunday, the third of a trio of events designed to attract locals and visitors alike to the village.

Preserving and promoting the tradition of the Wren is a key element behind the Christmas in Glin event,  explained Cllr John Sheahan, speaking as a member of Glin Development Association which is behind the event. “The tradition of Wrenboys is very strong in  West Limerick and the idea of the festival is to show people, who may no longer have visits from groups of Wrenboys and to show the younger generations, what the tradition of the Wren is all about,” he said. Other areas, he pointed out, have their Strawboys or their Biddies but West Limerick has preserved its strong link with the Wrenboys.

“This is our second year and we thank Sheila Deegan and the Limerick Arts Office and the Creative Ireland programme for providing funding again,” Cllr Sheahan continued.

The fun will kick off at 2pm when, weather permitting, there will be special Christmas stalls in place in the Square, providing all kinds of goodies from mulled wine to mince pies, from craft goods to giftware. Then at 3pm, the first of five Wrenboy groups will take to the stage. Groups from Athea, Glin, Ballyhahill, Lixnaw and Ardagh are all committed to taking part and to competing for the overall prize.

“This is not a confined competition but it is unique to West Limerick,” Cllr Sheahan said. There will also be a singing competition, with a selected nominee from each group, later in the day.