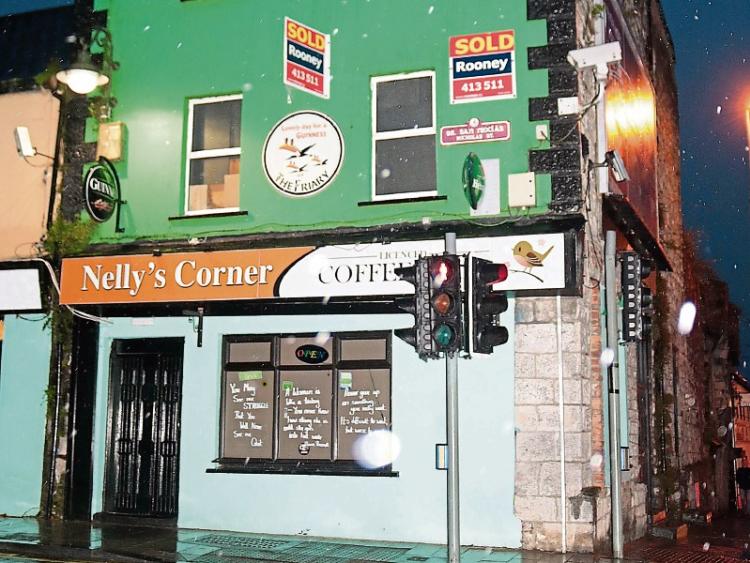 The Cafe at the centre of the dispute, Nellys Corner Cafe Picture: Michael Cowhey

A COUPLE who have been sleeping in a makeshift bed in their Limerick city cafe for the past fortnight are refusing to leave until a dispute with the owners of the premises is resolved.

Noreen and her husband David have vowed to remain in the cafe, Nelly’s Corner on Nicholas Street over Christmas “and will battle the issue out in court” if needs be.

They have been sleeping in a bed on the floor of the cafe for the past two weeks and had been operating by candlelight until recent days when they brought in a generator.

The dispute, the couple claims, centres on a disagreement over the lease and arose shortly after the new owners, Lucrative Developments LTD, bought the building.

“I feel we are being wronged. We had a five-year contract. We have two-and-a-half years left in the contract,” said Noreen, who claims the new owners started to question the validity of their lease.

“They refused to put the electricity in their (the company’s) name, which is what they are supposed to do. The metre operates the whole building. The electricity has now been cut,” said Noreen.

When contacted this week Phil Conway, one of the directors of Lucrative Developments, said they are “actively seeking resolution of the dispute and we are hopeful that it will be resolved very soon”.

He stated that the majority of the claims made by the couple “are outlandish and we reject them.”

“We at Lucrative Development did not cut off electricity. We wouldn’t do that. There is a dispute over the lease that's in place. It’s a dispute we are definitely hoping to resolve. But from our point of view, we have no issue with the lease agreement.  All I can say is our company is a new enough company. We are not a charity, we might donate to charity. But we are not a charity. We have no issue with the actual lease agreement that's in place.”

The couple closed the business last month which has left them without income and their five staff without jobs.

“We have no income now, weeks before Christmas. I have people who worked here for me, loyal staff, who are out of work. They have kids. My local butcher depended on us, so did a lot of other people because we kept everything local,” said Noreen.

While she claimed that the relationship between them and the new owner was “friendly” at the beginning - with the builder saying he had instructions “not to interfere in any way with our operations” - things soon changed.

Noreen says she will remain in the cafe until Christmas and beyond, until there is a resolution to the problem.

“I am putting up Christmas trees, you might think I am crazy but I have plenty of decorations and I will use battery operated lights if I have to.

“I’m staying here through Christmas, I’ll be here through St Patrick's day. I will not be moving. I promise you that,” vowed Noreen.

“I called this place after my mother. She was a strong woman, and I tell you, she handed it down to me because I will not be moved.”

The couple say the local support has been "amazing" with locals calling into the cafe every day to show their support.

“One neighbour described the business as the best thing that has happened to the street in 50 years,” said Noreen.

“The people of the parish and beyond have been so good to me. I am from St Mary’s Park. I live across the street. We’re proper Limerick people and we have never done anything wrong to anyone,” she added.