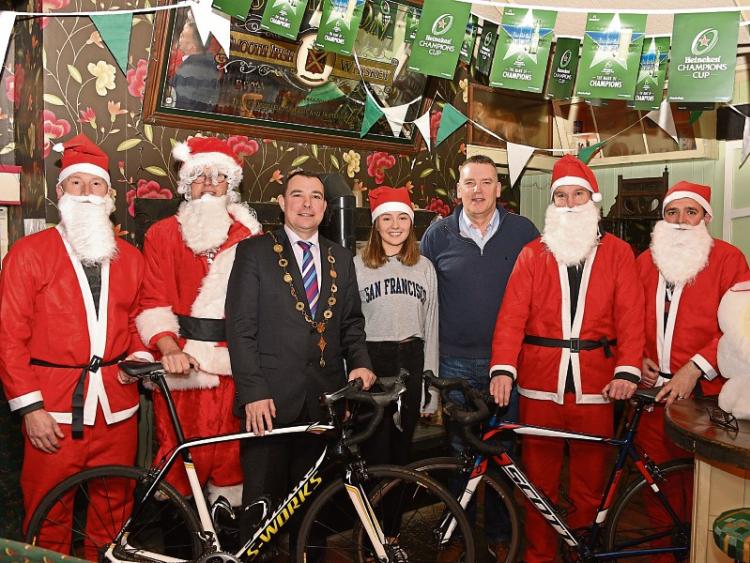 It departs from the Hurlers Bar in Castletroy at 7.30pm and is part of a wider national initiative to raise up to €1m for some of Ireland’s sickest children.

This Sunday, instead of sleigh bells ringing, bicycle bells will ring from Castletroy for the cycle.

After its massive success in Dublin and Cork in the past four years, a troupé of Santas will cycle in Limerick in aid of children with scoliosis.

The 14km route will begin at the Hurler’s Pub in Castletroy and will cycle into O’Connell Street, turn at Henry Street and back out the Dublin Road and return to the pub.

The cycle is organised by the Laurel Cycles crew who have raised nearly a million euro for various charities in the past decade.

One of the charities, Straight Ahead is a medical support group affiliated to the Children's Medical and Research Foundation (CMRF), which supports children with orthopaedic conditions, including scoliosis.

One teen who suffered from scoliosis was Jenna O’Brien, from Raheen who was forced to sacrifice her hobbies because of her condition.

“I was involved in running, hockey, drama and learning to play violin and was struggling with all of them because of back pain which wasn’t normal for a twelve-year-old,” Jenna recalled.

After agonising months of waiting for surgery and treatment at Crumlin Hospital, the team at Straight Ahead gave her the support she desperately needed before her surgery.

“The surgery was life-changing, there was no more pain, and I was four inches taller, three months later I was back to school part-time and back to being a normal teenager,” Jenna added.

Ray O’Dell, the organiser of the Limerick Cycle, expects over a hundred Santas will cycle across the country on the day.

“We are calling on the public to join and support us for a day full of enjoyment, with one common goal to do whatever it takes to help some of Ireland’s sickest children,” Mr O’Dell concluded.

Anyone over the age of 16 can sign up for the cycle on December 2 at 7:30pm, to register visit Eventbrite.ie, participation fee costs €30.