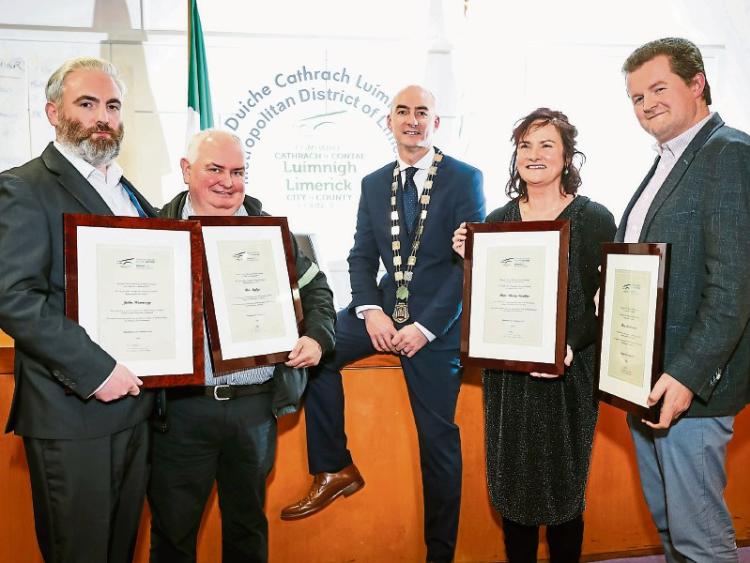 Cllr Butler took time to mark the contribution of some of the unsung heroes of the music scene after putting a call-out for nominees on social media.

Really enjoyed honouring these people last night for their incredible contribution to music in Limerick. With so many in the room sharing great stories of the many people that keep our city alive to the sound of music. #Limerick is a true city of music. pic.twitter.com/EDWzWLM3NI

Each of the fab quartet had someone paying their own unique tribute to them. Eoin Devereux of UL endorsed the honour for the University’s former entertainments manager Ber.

He said: “It was at a gig organised for the Cranberries by Ber in the Jetland that 32 A&R men turned up with the view to signing the band.”

Thanks everyone for the kind remarks on my recent award for my contribution to music in Limerick My thanks to Mayor Daniel Butler And to the thousands of UL graduates students and all who supported the thousands of events I organized. Love to hear your memories of events. pic.twitter.com/J0HrYIctVl

This is giving me the feels today. @BerAngley organised all the @UL nights out when I was there & @ProfDevereux was my sociology lecturer for 4 years. Good times
Congrats Ber. https://t.co/hGcac7XeFl

Welcoming a huge crowd to City Hall, Cllr Butler said: “Tonight we bring those from backstage to front and centre to celebrate their significant contribution to Limerick music life. From organising gigs, conducting choirs, encouraging young musicians and singers to just putting in the grind these people created an opportunity for us all to experience music in all its glory.”

Accolades poured in for Ber thanking him for his contribution to their student life at UL, with everyone from RTEs Ruth Scott to singers such as Kathleen Turner also present.

Dr Sandra Joyce, director at the Irish World Academy was on hand to endorse Dr Scanlon’s honour, saying she “exudes calmness and has an incredible energy and passion to get everyone involved in the joy of choral singing”.

John Hennessy was honoured for his contribution through Seoda Shows, which has brought some of the best musical acts to the city over the last few years, while Shane MacCurtain was also recognised for his support of the Make a Move Festival.

He advised those present to “seize the moment and support music!”