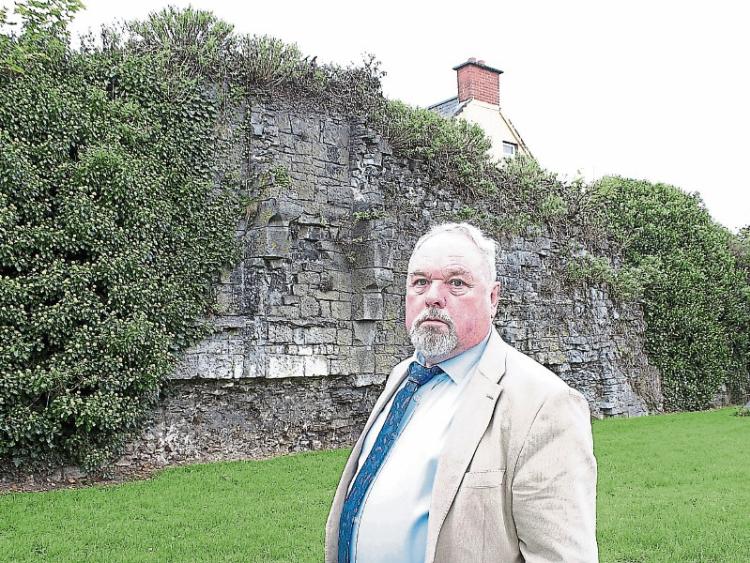 Cllr John Gilligan pictured at the walls of Limerick

LIMERICK council should be “ashamed of itself” for allowing the City Walls to fall into “rack and ruin”.

That’s the view of firebrand Independent councillor John Gilligan, who has pledged to fight for the future of the ancient boundaries in his final few months on the council.

In a notice of motion submitted to this week’s metropolitan district meeting, the veteran member urged the local authority to remove all vegetation from the walls and repair them to recognised standards.

“What is left of the Walls of Limerick, particularly going down the Island Road, are slowly crumbling into dust, and nobody seems to give two hoots about it. It’s something I have been bringing up since the first time I went onto council, and that was 28 years ago,” he said.

Cllr Gilligan pointed out that other European cities take pride in their city walls, adding: “We let ours fall down – it’s disgraceful. We should be ashamed of ourselves.”

He pointed out that a housing development near King John’s Castle was once vetoed because of the presence of the walls.

“We had designed a beautiful housing development in the old Car Park opposite King John's Castle, and when we had it planned, someone from Dublin told us we could not build it there.

“It was because the remains of the wall ran under it. But these were long gone and long buried – yet the walls which are still visible are falling down,” Cllr Gilligan said.

Limerick’s famous City Walls date back to a time the Normans first arrived in Limerick. Then, the natives moved across the Abbey River and formed an important enclave called Irishtown.

The walls were completed in the 1590s, but only some of the main features are still preserved including on the Island Field, and at St John’s Hospital.

Much of the walls were knocked down when the city’s status changed in 1760.

Fine Gael councillor Elenora Hogan agreed “the walls are in a shocking state of disrepair”.

Her party colleague, Cllr Michael Sheahan said: “We spend a lot of money providing protection to graffiti and things which are of little historical value. Yet we neglect our own history.”​

Sinn Fein member Séighin Ó Ceallaigh added: “We cannot just focus on the walls around areas of the castle – we need to focus on other parts just as much.”

Architect Maria O’Donoghue in response: “The best we can do without funding is to maintain the walls as best we can. In terms of stabilisation, this is very expensive.”

“Subject to funding, it is something the council is interested in doing. It’s something which is reflected in our tourism plan,” she added in response to Cllr Gilligan’s motion at this month’s meeting.