Lighting up time in West Limerick as Christmas countdown starts 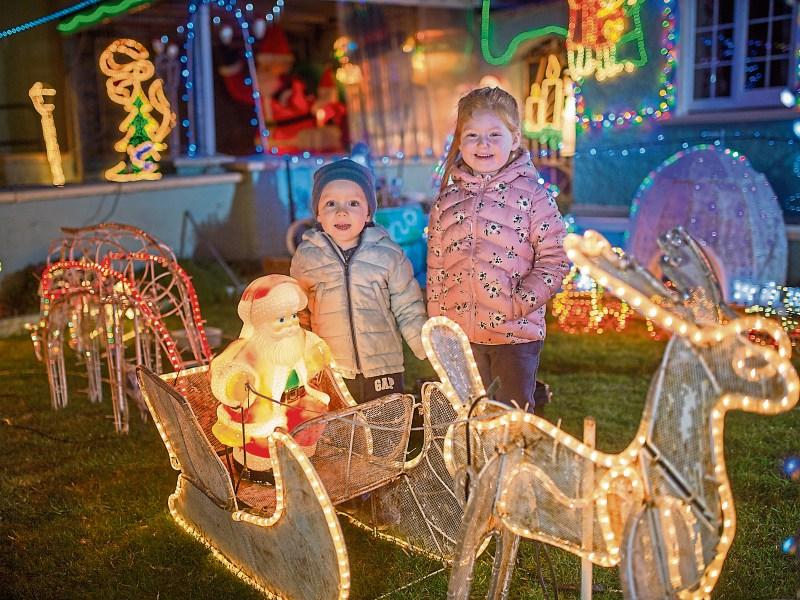 CHRISTMAS is galloping fast towards communities in every corner of West Limerick. But those self-same communities are determined to ensure the festive season gets off to a bright start and lighting up ceremonies will be going ahead from this weekend, starting this Sunday with the Hayes family in Shanagolden.

The Shanagolden display is back and packing an even bigger punch and leading the charge on the Christmas lights.

This Sunday, at 5pm, they will turn on their Winter Wonderland display of nearly 150,000 lights. And their very special guest, Santa Claus, will be doing the honours and turning on the power.

Meanwhile, for the past 20 years or so in Askeaton, Patsy and Francis McCarthy and their family have been lighting up their home in aid of various charities, helping to raise tens of thousands of euro over the years.

It takes days to put all the lights in place, Patsy admitted this week. But over the years, he has perfected a system and now has all the power-points and wiring securely and safely in place, ready for the light features.

“I wouldn’t be worried about wind,” he explains. “Everything is storm-proofed.”

Like others who make great play of Christmas lights, Patsy has lost count of his accumulated lights and light features . “It must be over 10,000,” he reckons.

Not a surface is left undecorated, with the roof, walls, garden and even the car-port  designated for his very special features, one of which is a Santa Claus arriving by balloon.

This year, for the first time in two decades, he thought perhaps he would “just put up a few lights for ourselves”.

But two highly deserving local charities in need of funds helped change his mind. One is the Mud Search and Rescue Group who are specially trained to carry out searches close to the river. The other is the Blood Bikers Mid-West, a group of  motor-cyclists who transport life-saving blood for patients around the country.

In August, Patsy explains, a good friend of his, Mikey Sweeney was killed while returning on his bike from doing a Blood Bikers course in the UK.

He was just 48 and Patsy, his family and the Blood Bikers Mid-West want to remember and honour Mikey this Christmas. The McCarthy lights go on on Friday, November 30.

Friday, November 30 is also the night of the big switch-on in Abbeyfeale leaving just eight sleeps until Santa arrives at his grotto in the Square according to Gerardine O’Brien of the Abbeyfeale Christmas Lights Committee.

This small but hard-working committee got tremendous support last year from locals, helping them to spend up to €15,000 on new light features for the town.

So far, support is also running well for this year and they have received a €2000 grant from Limerick City and County Council.

Last weekend, the church gate collection and a fun pub quiz got their fund-raising off to a great start and continues with bag-packing at Twohigs SuperValu this weekend.

But the Christmas lights are an expensive business.

The group is adding  more light features again this year to make the town even more attractive and festive  but also needs money to cover the heavy costs of erecting, running and taking down the lights.

A great Christmas atmosphere is promised for  Friday, November 30 at 6pm

Tony Noonan, Templeglantine who has won awards for his Christmas Lights display will have Nicky Quaid and other hurlers to help turn on the lights also on Friday November 30 at 4pm. The Christmas lights in Newcastle West will begin to go up next week and lighting up will take place on December 8.