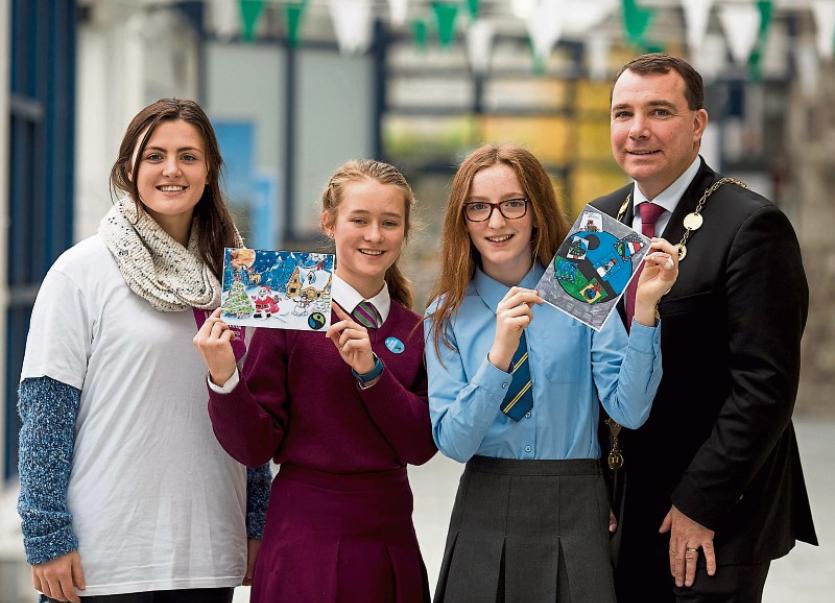 STUDENTS from across Limerick have been honoured for Christmas cards they have designed to celebrate Limerick Fair Trade’s 13th birthday.

Hockey silver medallist Roisin Upton and Mayor James Collins were on hand to honour the budding designers in her new role as Limerick Fair Trade ambassador.

The cards reflected the Fair Trade message of promoting ethical practices between Ireland and developing countries.

Cards were created by pupils of all ages, ranging from five up to 17 years.

The overall winners of the awards were Izzy Duggan of Scoil an Sporaid Naoimh in Roxborough in the junior section, while Olga Kyrychenko of Laurel Hill secondary school took the senior award.

Their cards will be reproduced and sent to a variety of local businesses, shops and cafes which have supported the Fair Trade initiative throughout 2018.

Meanwhile, a number of students were highly commended for their entries.

In the junior section, they were​ Shane Collins and Casey Pleavin of St Mary’s Boys National School in Abbeyfeale, Hollie Kearns and Olivia Begley of Donoughmore National School.

Flying the flag for Meenkilly National School in Abbeyfeale was Abi Bishop., while Amber Daly, Katie MacNamara and Carla McCarthy, from Corpus Christi in Moyross were commended.

Abigail Bates and Lexie Kenrick from Presentation primary school in Sexton Street were commended as were Renee O’Donoghue and Elizabethka Palkova, of Our Lady of Lourdes PS Rosbrien.

Commended in the senior section were Kerri Collins from Ballinacurra,  Miguelangel Leo and Lennon O’Neill from Coláiste Mhichí in Sexton St.

They were joined by Sinead McGuinness, Tommy O’Rourke and Owen Meany, from John the Baptist Community School, Hospital.

And Eva Kelly, Romina Chumo, from Laurel Hill Secondary School were honoured, as were Alan Wallace, from Desmond College in Newcastle West.