Project Lifesaver: Limerick students warned about risks on the roads 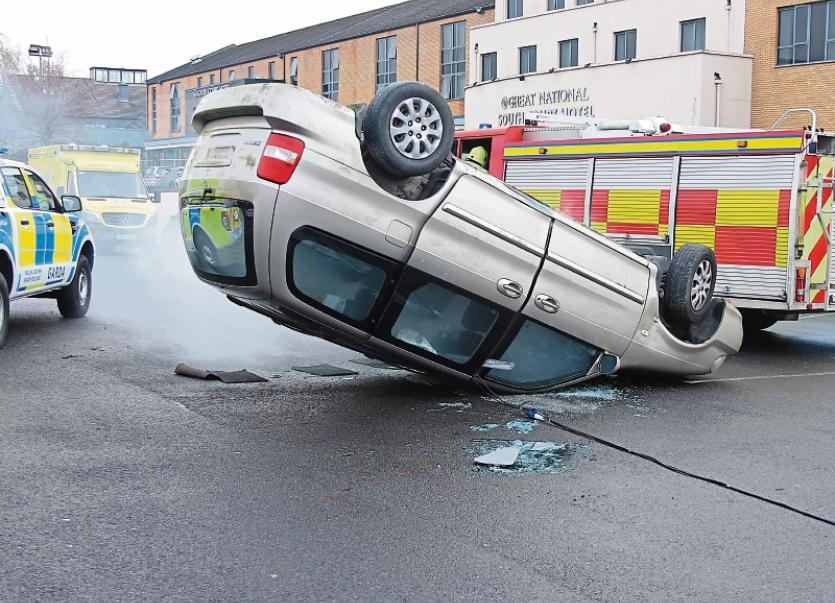 A fatal collision was simulated during the Project Lifesaver event

THE dangers associated with bad driving and poor concentration behind the wheel were aid bare for hundreds of Limerick students at a major road safety event.

More than 1,000 students from schools across the city and county attended the Lifesaver Project demonstration and seminar which took place over two days at the Great National South Court Hotel.

The initiative, which first started more than a decade ago, aims to highlight the reality of road safety. It is is especially targeted at students and young people who are about to embark on their driving careers or who travel in cars with young friends.

“It is trying to get through to them that it’s about your attitude when driving. If your attitude is poor there is a far greater chance of you being involved in a road traffic collision,” said Sergeant Tony Miniter.

As part of the multi-agency initiative, actors and members of the emergency services replicated a two-car collision, involving a fatality caused by a drink-driver.

Following the demonstration, students attended a “hard hitting” presentation during which a number of people who were seriously injured in car crashes relayed their experiences.

Gardai and paramedics from the National Ambulance Service also took part in the demonstration along with crews from Rathkeale Fire Station.

So far this year, seven people have died in road crashes in Limerick.