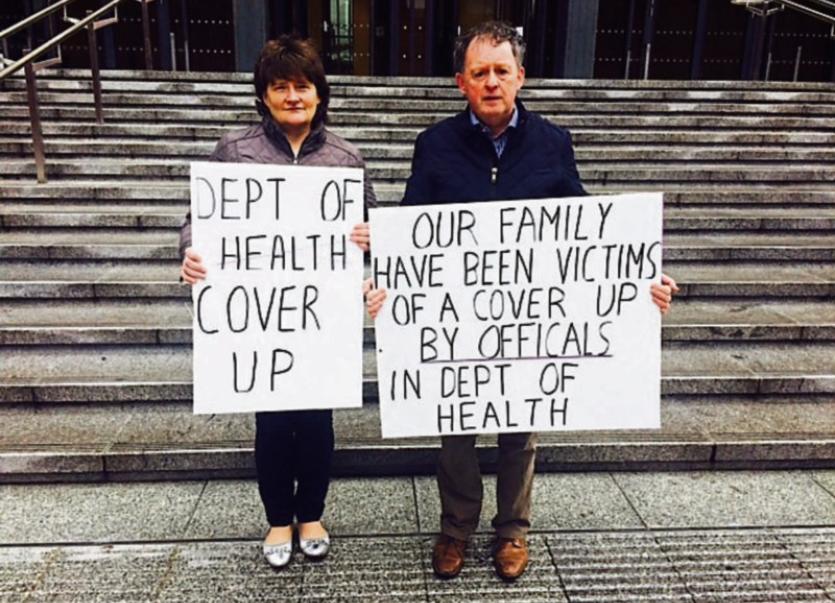 WEST Limerick couple, Pat and Nuala Geoghegan, staged a protest outside the Department of Health in Dublin this Wednesday to highlight their claims of a cover-up over vital samples given by them as part of the Askeaton animal and human health investigation in the 1990s.

The Geoghegans were one of the families at the centre of that EPA-lead investigation as their livestock were badly affected and the family also  suffered ill-health. They believe the samples of hair, blood etc which they gave were crucial to that investigation and could have helped provide the answers to the wider puzzle of animal and human ill-health in the area.

But those samples, they were told almost 20 years ago, had been lost through human error. Now, the Geoghegans believe they have put together sufficient evidence to demonstrate that this so-called loss was part of a cover-up in which different Ministers of Health were misled but  high-ranking officials were protected.

They have compiled the evidence and given it to Dr Michael Harty, the Independent TD for Clare who is also chairman of the Joint Oireachtas Committee on Health.

Dr Harty gave the material to Health Minister Simon Harris last month and asked him “to have these documents assessed and a response in detail given to the Geoghegan family.”

In a reply to Dr Harty this Wednesday, Minister Harris said he was having the issues raised examined and would reply to the deputy shortly.

Meanwhile, the Geoghegans have travelled to Dublin this week to highlight their case. After they were told the samples had been lost, Mr Geoghegan explained, they campaigned for the matter to be investigated but were very unhappy with the results of an internal review, arguing that it was neither independent nor transparent. A key argument and conclusion of the review was that the samples were not germane to the wider investigation.

“Since that internal review, we have been getting Freedom of Information material which has disclosed to us that we were in fact correct,” Mr Geoghegan told the Limerick Leader.

Letters, which they now possess, contradict the conclusion of the internal review, he argued, and show that the EPA enquiry was misled and subsequently a Minister for Health was also misled. He also contended that  a high-ranking official played a role in preventing the further investigation, which they had sought, from going forward.

“After 19 years, we feel the evidence is there, handed over to Dr Michael Harty and now to Minister Harris,” Mr Geoghegan said.

“We feel an enquiry needs to be opened because there are major questions to be answered regarding senior officials who dealt with our case.”

Commenting on the matter, Fianna Fail’s Willie O’Dea said he had received documentation from the Geoghegans.

“It does appear to raise very serious issues which would warranet investigation, if the evidence is there to back them up,” he said.

He looked forward to meeting the Geoghegans on the issues they have raised, he added.