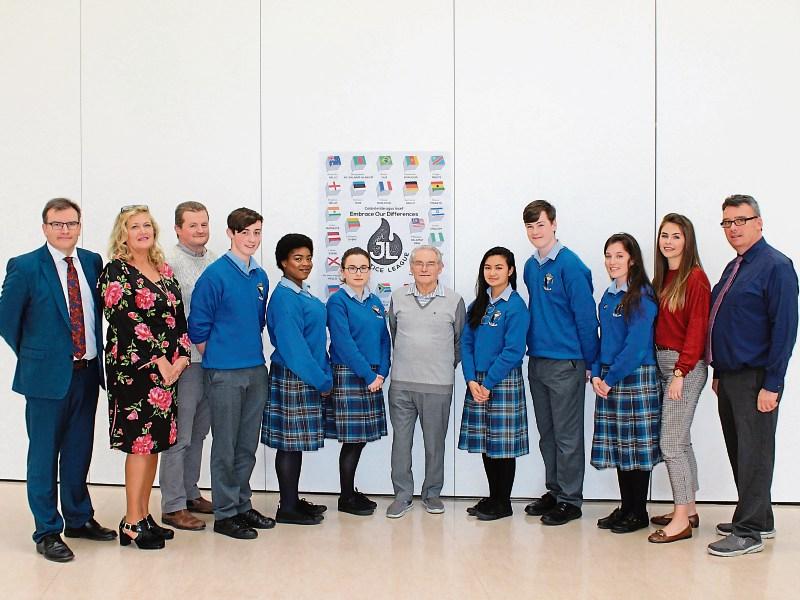 HOLOCAUST survivor Tomi Reichental had two clear, unequivocal messages for the students and teachers at Coláiste Ide agus Iosef in Abbeyfeale when he visited the school last week.

“If you see something wrong, don’t become a bystander,” he said. But he also warned: “The slogans we heard in the 40s are being heard again. It is very important we don’t forget, that we learn from history.”

In a quietly powerful and dignified address to some 300 or so students, Mr Reichental told the story that is now, over 70 years after the ending of the Second World War, recorded for  posterity in his book, I was a boy in Belsen.

“My aim is to keep the memories alive,” he said, explaining that in the next 15 or 20 years, no survivors will be left. “I lost 35 members of my family in the Holocaust. I owe it to the victims that their memory is not forgotten.”

“The Holocaust must never be forgotten. It was premeditated. The aim was to eradicate the entire Jewish population of Europe. It nearly succeeded,” Mr Reichental said, pointing out that six million of the 11m Jews in Europe perished.

He described his own childhood in a village in Slovakia where his grandfather ran the village shop and his father was a farmer and where their lives were changed with the onset of war and in particular with the introduction of the Jewish Code in Slovakia in 1941.

“Suddenly, from one day to another, we were excluded from society,” he said.

The 270 restrictions included the wearing of the Yellow Star, a curfew, a ban on driving and from public places and for him, being kicked out of school. But he explained: “Whatever was done in Slovakia was done by the Slovakian Government.”

The first transports of Jews began in March 1942, young men and women, stripped of citizenship and deported to “help” the war effort in labour camps. Over six months, 580,000 were taken and less than 500 survived.

Tomi’s family survived until August 1944 when Germany occupied Slovakia. “We knew at the time that if we stayed in the village that sooner or later somebody would betray us.”

The family made plans to escape, obtaining false papers through a Catholic priest but then, Mr Reichental said, describing in detail the day in October 1944 when that plan failed, the Gestapo rounded up 13 members of his family, including his mother and brother.

For a while, they were detained in a camp until a “selection” took place on November 2, 1944. Seven of his relatives  were sent to the right to Buchenwald camp. Only one came out alive. Six were sent to the left, his grandmother, mother, aunt, cousin, brother and himself, boarded on to cattle wagons and sent to Bergen Belsen.

For seven days, he and his family experienced the horrific conditions of the wagons, without proper food, water or toilets. One man in their wagon died.

On November 9, 1944, hungry, disoriented and terrified and  following a two-and-a-half arch, they arrived at the gates of Bergen Belsen.

“Bergen Belsen was not an extermination camp,” Mr Reichental explained.

It was a detention camp for Jews, gypsies and gays.

“We saw skeletons walking around. We didn’t know whether they were men or women. It was hell on earth. We saw people die in front of our eyes.”

“The smell of death was everywhere.”

And the smell of burning flesh as those who died were cremated.

But as the months passed and the numbers of dead increased, corpses were left to lie, piled up, unburied, uncremated. Liberation finally came on April 15, 1945 with the arrival of the British Army.

The Holocaust,  Mr Reichental said, began with whispers and abuse but ended in murder. And he raised a warning about “the rise of racism, of xenophobia, of anti-semitism in Europe, especially in Eastern Europe.”

“History is being repeated after only 70 years,” he said.

And he likened today’s refugee problem to events in Europe in the 1930s. When the Jews wanted to escape, nobody wanted them, he said. Now, nobody wants the refugees fleeing persecution.

“We have racism in Ireland. If you see somebody being bullied because they are foreign, they are a different religion or a different colour, don’t become a bystander,” he said in conclusion.

“Get involved and say it is wrong. At the time they did it to us, nobody said it was wrong. In the end it ended with a terrible tragedy.”