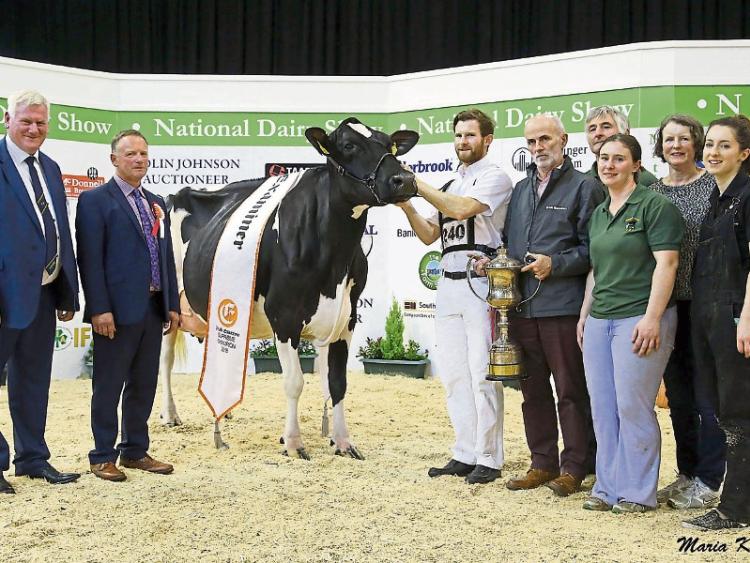 “THIS is very special,” said Donal Neville, after his cow Milliedale Dusk Rhapsody EX95 was named supreme champion at the National Dairy Show in Millstreet.

“It’s a dream come true for the whole family. It is up there with Liam MacCarthy for us and Liam MacCarthy is very special to me. I was lucky enough to be there in 1973 as a 10-year-old and not far away from where the Cup was presented. It has been a fabulous year for Limerick,” said Donal, who coached Limerick captain Declan Hannon at U16 level.

Saturday was a very proud day for Donal, Kathleen, and their three children – Ann, Thomas, Caitriona, and their herd – Emerald Holsteins.

“When we bought this cow last year we bought her as an investment to breed something off her and to sell stock off her. This is a real bonus to get almost three championships at the biggest shows in the country – champion in Charleville, reserve in Baileys and this is the All-Ireland final for us.

“We have been going down to Millstreet, since the kids were small, carrying calves and lucky to get into the top six. And now to do what the Frawleys and Barretts have done – I could start getting emotional about it,” said Donal.

They even took home a big Cup just like the Liam MacCarthy. Milliedale Dusk Rhapsody reversed the form with the cow that beat her to the Diageo Baileys Irish Champion title.

“I’m not just saying this because we won but the standard was so high. Breeders who were going there for a long time were saying it. Our cow was in the mature class, she has had five calves. There were eight or 10 cows in that class and often you would have three or four cows in the older cow class. This year there was a much larger number and the standard was so high,” said Donal.

Milliedale Dusk Rhapsody won the mature class and then was named supreme champion.

“We beat the crème de la crème. The best cows in the country were there,” said Donal.

What made it extra special was Donal and Kathleen shared the day with their children and close friends.

“They take days off for shows. That’s what is sweet about it. There has been a lot of congratulations. It’s big. We went down on Wednesday and stayed overnight to get the cow settled into a routine. People don’t realise the work that goes into this.”

The last word must go to Milliedale Dusk Rhapsody, who Donal calls a “lady”. Expertly shown by son, Thomas, Donal says she shows herself off extremely well in the ring.

“She improves herself when she goes in to the show ring where as others don’t always co-operate. Her temperament is excellent, she’s elegant, she’s a lady really, she’s so pleasant to work with.”

Amazingly, the cow’s mother got honourable mention in a show in the UK last month and the Neville’s cow’s first daughter won a calved heifer championship in Yorkhsire – three in one year.

And there was even more Limerick success at the National Dairy Show as the Hannans won the Ornua Cup for intermediate Holstein champion. Paul Hannan, from Crecora, owns Lisnalty Megasire Rituel.

National Dairy Show director, John Kirby said: “I think this has been one of our best shows ever with certainly the largest number of trade exhibitors and with a varied programme of events offering something for everyone has led to record numbers attending our 36th annual show this year.

“The cattle programme certainly didn’t disappoint with many first-rate animals on display culminating with the announcement of another win for Limerick in 2018!”