Limerick Person of the Month: Reformed addict Ger Lynch is a beacon of hope 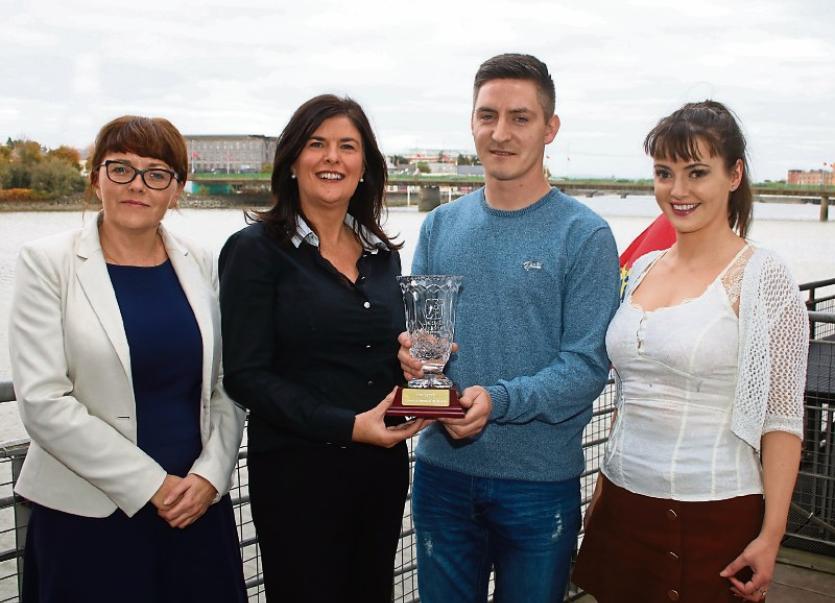 A FATHER-of-seven who overcame the vicious cycle of heroin addiction to help others battle their own demons, has been honoured with the Limerick Person of the Month award.

“It’s a great honour. It feels like re-acceptance, if that makes sense,” Ger Lynch said on being presented with the Limerick Person of the Month award at the Clayton hotel.

In the past week the O’Malley Park resident made national news when speaking about his experience of drug addiction and homelessness at the launch of Novas’ new headquarters on O’Connell Street and its annual report.

The 32-year-old delivered a strong speech in front of politicians, outreach workers and management of Novas which provides temporary and long term supported accommodation and social housing to people who are homeless.

He was hailed “a leader for our city” by the Metropolitan Mayor of Limerick Daniel Butler for his extensive efforts in tackling his own addiction and advocating for victims of homelessness and drug misuse.

“To hear that from anybody, that’s a great honour but especially from the mayor. If my story and going back into education and studying can give somebody hope, somebody who is in the position I was in, well then that’s kind of mission accomplished for me,” said Ger.

A “late drug user”, Ger only started consuming cannabis at 18, six months before heroin entered his circle of friends. It wasn’t long before he was a heroin addict.

“I often had to go out at seven in the morning to get the drugs so I would be OK for the time the kids woke up to get them ready for school and get breakfast. The body is literally screaming out for it - it’s not a nice feeling,” he explained.

“I wasn’t even a person, I was a vessel for the drug.”

In an extensive feature with the Leader's Fintan Walsh last month Ger described how his role models were the boys on the corner selling drugs as he felt he had nobody else to look up to. That was when Ger became a corner boy, selling bags and ounces of heroin, mainly to feed the habit that was gnawing at his life.

Amid this crisis, Ger was hit by two heartbreaking family tragedies; the deaths of his sister and two-month-old son, Ger Jnr.

His sister passed away following a Paracetamol overdose. Baby Ger died 10 years ago as a result of cot death, or sudden infant death syndrome.

It was not long after these two tragic incidents when Ger had the wake-up call to fight this debilitating lifestyle.

“I realised I didn’t want to do it anymore - that’s not who I am, not who I wanted to be. It was hard though, it was. You are wondering, if I get out of it are people always going to judge me on my past? I’m now waking up every morning, not needing something. I’m able to spend time with the kids.”

But while combating this addiction, Ger had been homeless and was under the roof of a hostel for around six years, all in his early 20s.

Ger was taken on by McGarry House on Alphonsus Street in the city, which is operated by Novas, one of the pillar organisations responsible for tackling Limerick’s heroin scourge.

At McGarry House, Novas runs the unique Topple peer overdose programme, in which participants learn how to prevent, respond to and support others experiencing overdoses. Ger was among the first graduates three years ago.

Ger’s main focus at the moment is to continue his education and try and understand everything there is on the academic side of addiction “and hopefully be able to help people who are in my position”.

“If I can inspire them to show them I’ve come out of it, then maybe they can do it too.”

He is studying addiction studies with the Mid-West Regional Drugs and Alcohol Forum and will do a diploma in Drug and Alcohol Studies with UL next year.

These days when the thoughts of drugs enter Ger’s mind he thinks back to how bad times were “and it’s not as appealing to me as the early stages were.

“When you come out of it you are faced with your reality again, you have all the emotions again. It’s easy to block them out when you continue to use. I knew if I can’t learn how to deal with my own emotions then how am I going to teach my children to deal with theirs? It’s a problem I have to face so hopefully they don’t have to face it,” said Ger whose seven children range in age from 14 years down to seven months old.

His partner Serena, also a reformed addict, he says, “is my rock - the foundation that holds it all together.

“I want to thank McGarry House, Novas and the sponsors of this award for thinking of me,” he continues.

“Too many people are still struggling. Hopefully people will read this and see that society will accept you again.

“I think Limerick is a very open city - we don’t really hide our flaws, we try to identify them and see if we can fix them, which is very good.”

The Limerick Person of the Month award is sponsored by the Limerick Leader, media agency Southern and the Clayton Hotel.