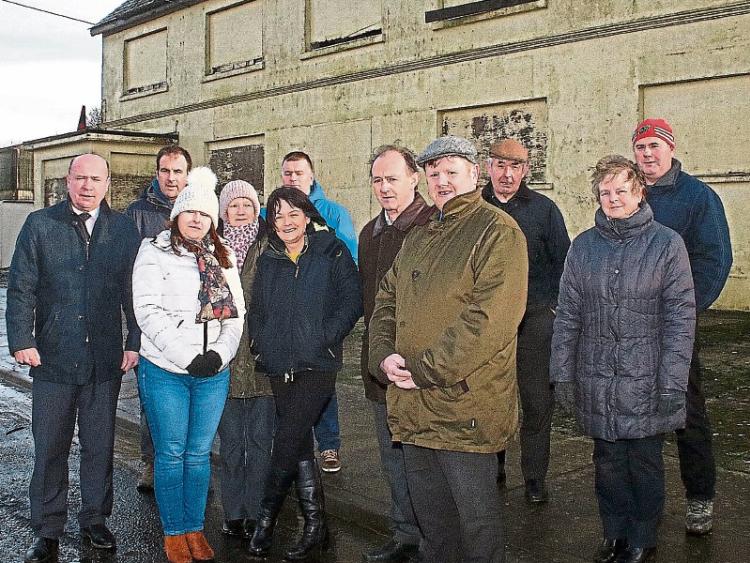 Cllr Bill O’Donnelll, pictured left, with a group of locals in January, said he has been highlighting the lack of action at the derelict old store in Herbertstown since 2009

QUOTING Tom Cruise in the famous scene from Jerry Maguire, Cllr Bill O’Donnell told the council to “show me the money”.

Cllr O’Donnell was responding to a presentation by Gordon Daly, director of social development, on derelict sites and vacant homes in the Cappamore-Kilmallock municipal district.

Mr Daly said a new vacant house officer has been appointed. Between January and September, 152 inspections were carried out with 30 properties sent to the buy and renew scheme. Twelve were listed as vacant. Mr Daly pointed to the council acquiring compulsorily Market House in Kilfinane.

“Good progress is being made. We realise a lot more needs to be done. We approach owners first and advise them. We can only be so patient. After a month or two they are placed on the derelict sites list. You are going to see an increase of sites going on to the register and see an increase in CPOs,” said Mr Daly.

Cllr O’Donnell said the people in Bruff and Herbertstown would be “very cynical”.

“The view in Herbertstown and Bruff is that Limerick City and County Council is all talk and no action. When I was first elected in 2009 I raised the issue of the derelict old store in Herbertstown. I’ve raised it every six months since. Then there is our own council premises in Crawford Street in Bruff which has been idle for 10 years. I appreciate the endeavour but I see no teeth. We are possibly crying wolf,” said Cllr O’Donnell, who then quoted Tom Cruise from Jerry Maguire.

“Will you throw money at dereliction. Show me the money. Use the power of CPO and the people of Bruff and Herbertstown will say you are serious at last. I’m a small bit insulted,” said Cllr O’Donnell.

Cllr Noel Gleeson said: “We have not made progress.”

“I know it is tricky but if we can go forward with that strategy I hope we will see action. Some derelict buildings in villages are a disgrace,” said Cllr Gleeson.

Cllr Mike Donegan said it is great to see progress “finally”.  He pointed to a number of “eyesores” in Kilmallock.

“Those not living in the community have no interest,” said Mr Donegan, who called for vacant commercial buildings to be turned in to accommodation.

Mr Daly agreed, saying there are commercial buildings that will never be commercial again and it would bring “life on the street”.

Cllr Lisa Marie Sheehy welcomed the CPO of the old creamery in Kilfinane. She said there needs to be more balance with regard to planning on listed buildings.

“If the owners want to knock it they are told they have to build on to the side of it. If somebody wants to knock it and build their dream house isn’t that better than leaving one falling apart. As long as they’re not doing anything outrageous isn’t a new house better?” said Cllr Sheehy.

Cllr Brigid Teefy said there has been a lot of “frustration” over derelict buildings in communities and pinpointed Herbertstown.

“We want to keep rural communities alive. It is great to see houses sent to buy and renew. Hopefully there will be more progress,” said Cllr Teefy, who added that there are very few grants for work on listed buildings and the work is very specialised.

Cllr Ger Mitchell said action has to be taken on derelict and vacant sites.

Mr Daly described it as a “very useful discussion”.

“I can’t disagree with you. We will take on the challenge. In the last 12 months we have seen some progress - 150 inspections. We take the constructive criticism on board. You have given us a mandate to tackle this aggressively. We will be CPO-ing more properties. It is the ultimate sanction,” said Mr Daly, who added that they will come back in six months to let councillors know how they are getting on. Mr Daly asked councillors to email them properties as they would know the ones of “real concern”.

Cllr Eddie Ryan, chairman, said the the council has been understaffed in tackling this area but are now “taking the ball and running with it”.

“There is missed revenue as well. It would appear the council is doing more. We will look to the future and see,” said Cllr Ryan.