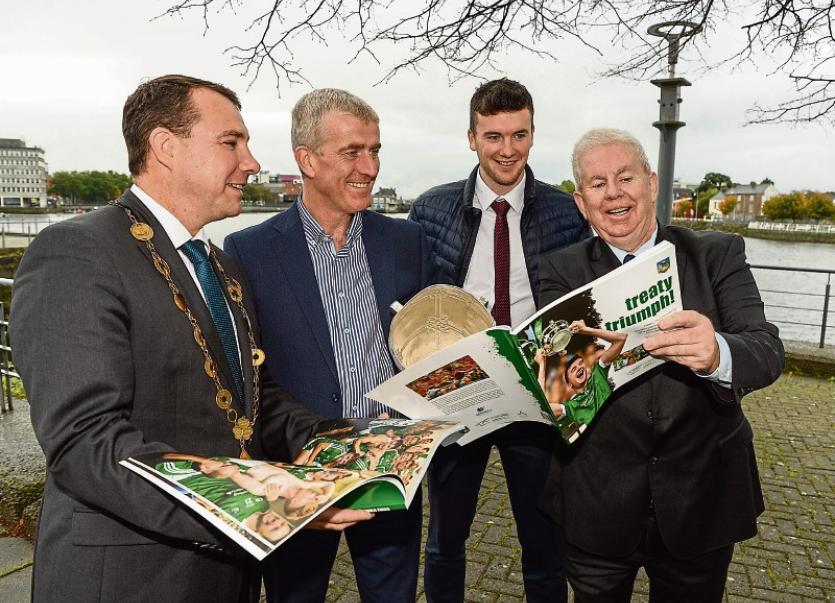 LIMERICK’S unforgettable odyssey from pre-season to All-Ireland success will be revisited in the new Treaty Triumph anthology on sale this week.

The 168-page album consists of stunning photographs from Sportsfile with words from Sky Sports presenter Damian Lawlor dating back as far as Limerick’s Munster Senior League clash in December against Cork - the first of several epic encounters with the Rebel County.

All-Ireland winning manager John Kiely reveals he maintained  his driven and ambitious ethos, even before the Allianz League campaign began.

“We focused on the achievable side of it, we couldn’t go into what the emotional benefit was for me, or the players, we remained focused on our goals,” he recalled at the launch of the book in City Hall this Tuesday.

Mr Kiely was impressed with the publication and expects that it will soon rest on the bookshelves of every Limerick hurling fan.

“It’s a treasure and a keepsake for anyone in Limerick who followed the journey of the team, and I reckon it will be in every household in the county.”

The album rekindled fond memories among players Declan Hannon Sean Finn, Dan Morrissey, Darragh O’Donovan, and Pat Ryan who were present at the launch in the Council offices on at Merchant’s Quay.

Shots of Limerick’s win over Tipperary in the opener of the Munster Senior Championship prompted Mayor James Collins to recall bringing his son to his first hurling match at the Gaelic Grounds and later to Croke Park.

“It’s a pictorial tribute that does great justice, thanks to the outstanding work of Sportsfile’s photographers,” Mayor Collins acknowledged.

Limerick GAA chairman, John Cregan was delighted with the launch and the cooperative effort between the Limerick county board, Limerick City and County Council and photographic agency Sportsfile.

“You’ll see on the front cover, it reads: ‘How Limerick’s young hurlers captured the hearts of a county and lifted the Liam MacCarthy Cup’.

“Well I think it’s fair to say that they captured the hearts of more than just the county, but the rest of the country and world as well,” Mr Cregan said.

Limerick GAA secretary Mike O’Riordan predicted that the book will be the most-sought-after Christmas stocking filler, this December.

Proceeds from the sales of the album will all go towards the players’ much-deserved ‘holiday fund’.

Sportfile’s Treaty Triumph goes on sale today for €19.95 in all good bookstores and online at Sportsfile.com.