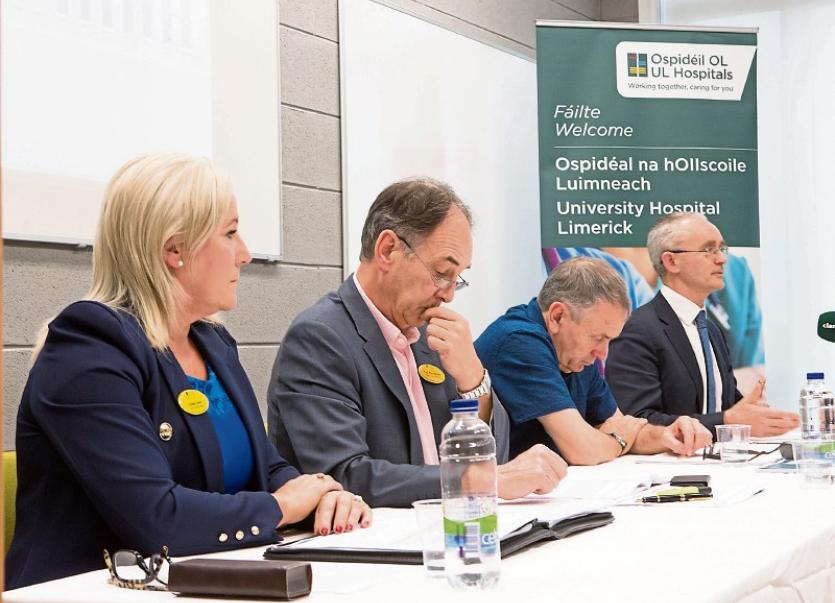 THE EXPERT behind University Hospital Limerick’s probe into 73 patient deaths has said the superbug crisis “threatens us with the dawn of a ‘post-antibiotic’ era, undoing many of the gains made in public health over the last century”.

The stark warning was made by UK microbiologist Dr Robert C Spencer, who was tasked with determining the correlation between the severe CPE superbug and the deaths of 73 UHL inpatients since 2009.

The UL Hospitals Group published a final report this Tuesday morning, revealing that CPE was an “associative factor” in eight deaths, and did not contribute directly to any deaths since the bug was first detected in 2009.

The report was the culmination of expert internal and external reviews that were carried out between June and December 2017.

UL Hospitals Group’s chief clinical director, Prof Paul Burke said that probes were launched following a major spotlight on the issue, particularly in the media, due to suggestions that patients “may have been at increased risk because of its presence in our hospitals”.

The public’s gaze darted towards UHL in November 2016 when the Irish Times reported that a whistleblower claimed up to 30 patients had died as a result of the CPE superbug. This was strongly rejected by Prof Burke in the media.

The findings of the UL Hospitals Group report were discussed at a press conference at UHL this Tuesday morning.

An internal probe, led by UHL consultant microbiologist Dr Nuala O’Connell, found that CPE contributed directly to three deaths, and was a factor in a further 10 cases.

Dr Spencer, who was unaware of these findings during his review, found that CPE was an associative factor in just five deaths.

In December, Prof Burke contacted Dr Spencer to reconcile both findings, resulting in the final figure of eight patients.

Speaking to the media this week, Dr Spencer said: “All the patients had underlying diseases, often multiple. That’s why it’s very, very difficult for people to say what did they die of.”

He added: “It’s very, very difficult to say which was the cause of death. I talk about an ‘association’ or a ‘contribution’ to death. That’s why, I suppose you could say, it’s somewhat woolly, it’s not definitive.”

Of the 73 patient records reviewed, it was found that 28 patients had heart disease, 25 had respiratory disease, 17 had hypertension, 11 had dementia, 10 had malignancies, nine patients had diabetes, six had gastrointestinal problems, five had cerebrovascular accidents, three had renal disease, two suffered from alcoholism, one person had motor neuron disease and one patient had chronic collagen disease.

From February 2009 to May 2017, a total of 196 CPE cases were recorded by the microbiology team at UHL, the majority of which were colonisation cases or carriers. CPE, which means carbapenemase producing enterobacteriaceae, is a superbug that has the strength to resist even the most powerful of antibiotics, and has proven to be a threat to modern acute healthcare settings and, furthermore, human health.

The first CPE superbug in Ireland was detected at UHL by a team of microbiologists, who created awareness on the new phenomenon through extensive research in Ireland and internationally.

“They did a lot of work for the country, in my view, in getting CPE on the radar. I think that it was groundbreaking. It was a first for Limerick, maybe not like the All-Ireland, but it was still a first that this bug was identified in the region. There has been a lot of learning. They have presented internationally on it at conferences on all the work that they did here in the region,” she told the media this week.

UHL is one of the leading hospitals in detecting and managing CPE, and has carried out more than 41,000 screenings since mid-2017.

Prof Cowan said that screening is “a very expensive resource” but that the group is “happy to spend that money”. She said that, in 2015, they spent €4.5m on staffing, hygiene standards and cleanliness and that that figure  is “growing year-on-year”.

Dr Spencer said: “The screening procedure is not easy; it’s onerous. It’s an enormous strain on resources, in terms of manpower, equipment and laboratory costs,” but adds that the UL Hospitals Group team “believe it all to be worthwhile”.

Of the eight families of deceased patients, seven have been contacted, Prof Burke said. Five families met with management, while two chose not to.

“We have only sent the report to the families in the last 48 hours. We obviously had spoken to them about their own particular circumstances. We haven’t had any feedback specifically on the report. In meeting the families, many of them did bring up issues related to when their loved one was in hospital. They had some outstanding queries and we have undertaken to correspond with them and to follow up with those things,” he said.

When asked if he could discuss some of their concerns or queries, he replied:  “No, they are personal things with each family. I would prefer not to discuss those.”

There has only been one paediatric case since 2009 when a young girl, aged between 0 and 10, had attended healthcare in Italy.

In his conclusion in his report, Dr Spencer wrote: “This [CPE] crisis threatens us with the dawn of a ‘post-antibiotic’ era, undoing many of the gains made in public health over the last century.”