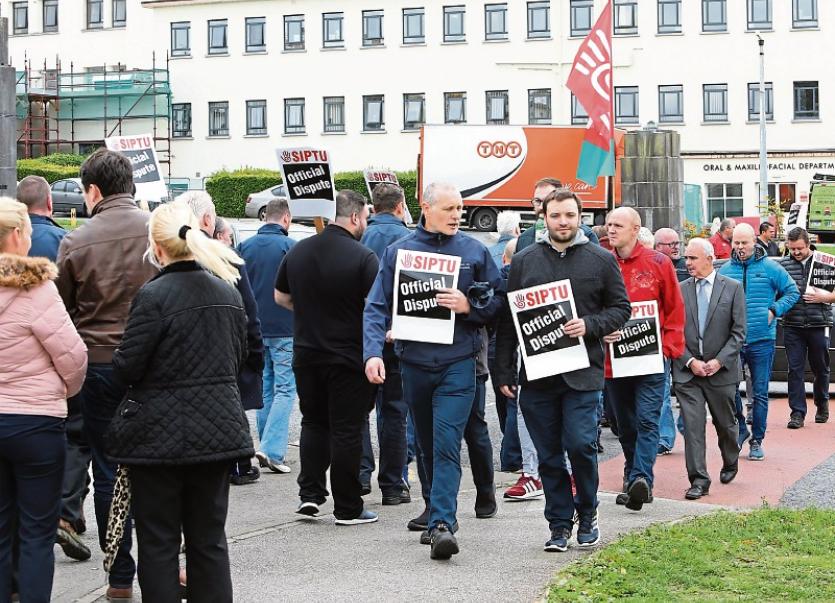 Over 50 porters picketed outside UHL this Tuesday morning over issues in relation to communal space Picture: Press 22

THE PROCESS of dispute resolution at University Hospital Limerick between management and some staff has been described as “dysfunctional” in a Workplace Relations Commission (WRC) review.

UHL management and members of Siptu met with the WRC’s advisory service to agree on arrangements for a review in April this year.

On Tuesday, over 50 porters protested outside UHL over ongoing industrial relations issues.

“Management acknowledges that the issue of staffing generally had always been a frontline issue,” the report wrote. Though management says that “significant steps” have been made to address staffing, there is “little willingness by the union to acknowledge the significant progress made”.

In its conclusion, the WRC stated: “The purpose of this review is, having identified the issues of concern, to assist with the development of recommendations/strategies around improving the industrial relations process. Apart from the interview process, I have liaised closely with my conciliation colleagues who have assisted and continue to assist the parties.

“The key factor is poor process around constructive dispute resolution and engagement around same. There seems to be limited capacity for the parties to engage in any form of meaningful collaborative engagement.”

The WRC recommended that it facilitates and moderates meetings at “regular and agreed intervals”. It also recommended that management explore appropriate initiatives to support local level engagement.

The UL Hospitals Group said both UHL and Siptu “accept the WRC report findings and a further meeting is scheduled with the WRC to facilitate the implementation of recommendations”.

A spokesperson for Siptu said that it welcomes the findings.