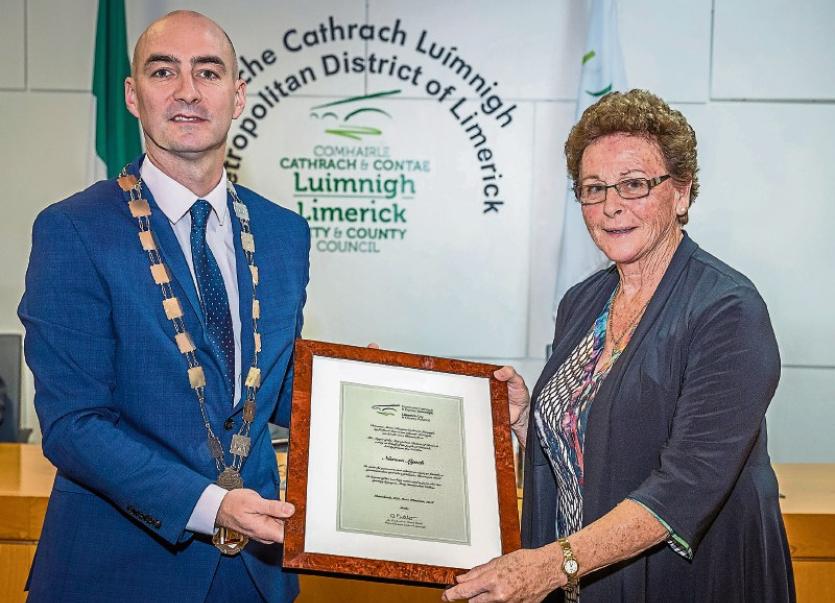 TRIBUTES have been paid to popular former Mary Immaculate College lecturer Noreen Lynch, who has passed away aged 76.

It comes just a fortnight after she was afforded a reception by metropolitan mayor Daniel Butler for her services to the college over a 35 year period.

College president Eugene Wall said in a tweet: “She will live on in the affections of our staff and the many, many graduates who will attest to her unwavering and selfless commitment to student welfare over a career of more than 30 years.”

She joined Mary Immaculate College as a lecturer in Physical Education in the early 70s. She established and coordinated all of the sport and recreation programmes at the college.

She helped to establish the O’Connor Cup, the ladies football equivalent to the Fitzgibbon Cup, which was inaugurated in 1987.

She also played a pivotal role in the organisation of the hosting of the Fitzgibbon Cup and the Purcell Cup in MIC in 1998 to mark the centenary year of the college.

Noreen set the foundations for the sporting success Mary Immaculate College’s teams enjoyed, particularly in hurling, where the sides won the Fitzgibbon Cup in both 2016 and 2017.

Tonight, only 12 days later, we mourn the shock loss of our dear colleague, Noreen Lynch. She will live on in the affections of our staff and the many, many graduates who will attest to her unwavering and selfless commitment to student welfare over a career of more than 30 years. https://t.co/LIWXGyn6JF

It is with great sadness we learn of the passing of Noreen Lynch. Noreen was honoured with a GAA President’s Award in 2014 by Liam Ó Néill in recognition of her outstanding voluntary contribution to the GAA. https://t.co/leVHGtoafB

She was afforded the reception for her years of service to the college by Cllr Butler, who said: “Her legacy will live on for many many more years”.

Back in 2014, she also received the GAA president's award from Liam Ó Néill.

At the reception, Prof Wall had the honour of paying tribute to a woman he had known for over 38 years.

He said: “Noreen was instrumental in promoting a wide range of sports at Mary Immaculate College, placing a great emphasis on student participation within a very positive, supportive environment.”

Prof Wall said one of his earliest memories of her was when she was in “full flight” on Friday morning in the college gym, providing exercise classes for local women.

“They came from far and wide at a time when, outside of sport and dance, there were no organised sessions for physical activity in Limerick,” he said.

Prof Wall added: “If I were to list her very fine personal qualities, we would be here for a long time. The ones that immediately come to mind are that she is a warm and caring person, and always had the best interests of students a heart. She is deeply committed, fiercely loyal, she always set the highest standards, was always formidable in her pursuit of doing what was right with unflinching integrity.”

Cllr Butler praised Ms Lynch’s “humility” on the night of her reception.

“It even made me more sure she deserved the reception. Her priority was to the young people she worked with, and seeing them succeed. That’s all she wanted. It was never about Noreen. It says a hell of a lot about the woman that on a night that really was supposed to be about her, she couldn’t allow it to happen,” he said.

Through the evening, Noreen was referred to as “Momma Lynch”.

“I think that is reflective of the person she was. People looked up to her, she offered great guidance and support to many teachers and young people over the years. She really has played a hugely significant part not just in Mary Immaculate, but in the education system in Limerick and beyond,” the mayor added.

Noreen was married to Jack, a prominent member of the GUI and was heavily involved in local sporting circles, who sadly passed away in 2016. Her son Mick Lynch played for Munster and is a teacher in St Clement's College.

At the reception, she was honoured alongside former Patrickswell National School principal Ciaran Crowe, and Sean O’Callaghan of Crescent College Comprehensive.

Reposing at Mary Immaculate College on Friday evening from 5.00pm to 8.00pm followed to removal to St. Joseph’s Church, O’Connell Avenue. Requiem Mass on Saturday at 11.30am followed by burial at Castlemungret Cemetery.