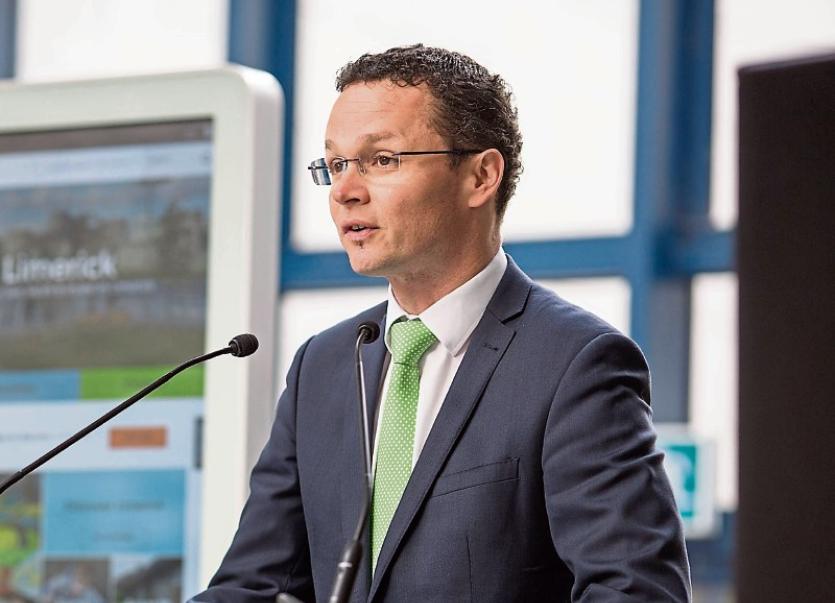 Minister Patrick O'Donovan is hopeful of resolution over Aughinish

“WE are hopeful that there can be a resolution,” Minister of State Patrick O’Donovan has said after the US announced a three week extension before sanctions kick in for Rusal, owners of Aughinish Alumina.

“We would hope that the additional time will facilitate a resolution of the issues in a way that protects the jobs at Aughinish Alumina.

“We are in close, almost permanent,  contact with the management in Aughinish,” continued Minister O’Donovan who has been deeply involved in the Irish government’s efforts to avert sanctions on Aughinish which supplies up to 30% of Europe’s alumina.

“As a government we are working closely with the company and the US authorities,” he continued pointing out that Taoiseach Leo Varadkar and Ministers Simon Coveney and Heather Humphreys have all put their weight behind the issue.

As late as this Tuesday, the Taoiseach, speaking in New York, said he wanted a more long-term solution on the issue, not just a three-week extension.

As part of the Irish effort to avert the Aughinish sanctions, Minister O’Donovan and Minister of State for Trade Pat Breen have travelled to the United States, and have held a number of meetings with US officials to explain the implications for Aughinish and its 450 workers.

The Irish Ambassador to the US Dan Mulhall and his staff, have been “superb” in their efforts, Minister O’Donovan said.

“As a government, we are conscious of making sure every avenue is explored,” he said.

“We have had very good bilateral relations. But we are conscious of the fact we are dealing with state agencies in another jurisdiction: the State Department, the US Treasury and the Office of Foreign Assets Control.”

Trade Minister Heather Humphreys welcomed the extension of the sanctions deadline and said her department had had “regular and close contact” with Aughinish.

“There has also been extensive engagement with the US authorities and our European partners in an effort to achieve a positive outcome,” she said.

“This remains a difficult and complex situation but we remain determined to find a solution.”

Fianna Fail spokesman on Foreign Affairs, Niall Collins TD said he was “very concerned that this latest extension is only for three weeks.”

“The uncertainty and worry generated at the imposition of these sanctions by the US Government is not lost on the local community.”

These included sanctions on Russian billionaire Oleg Deripaska the majority shareholder in EN+ Group which owns 48 per cent of Rusal, which owns Aughinish.

The US authorities initially gave the company until the end of October to come up with a solution to address Mr Deripaska’s interest in the company.

At the weekend, this date was extended by a further three weeks.

“EN+ and Rusal have approached the U.S. Government about substantial corporate governance changes that could potentially result in significant changes in control to allow sufficient time for review, we are extending these licenses until November 12,” a Treasury spokesperson said.

But President Trump’s 10% tariff on aluminium imports could also hurt Aughinish indirectly.  Aughinish supplies alumina to some of the biggest users of aluminium in Europe, who then export their products  to the US. EU imports were initially exempted but ultimately they will face the same rules.