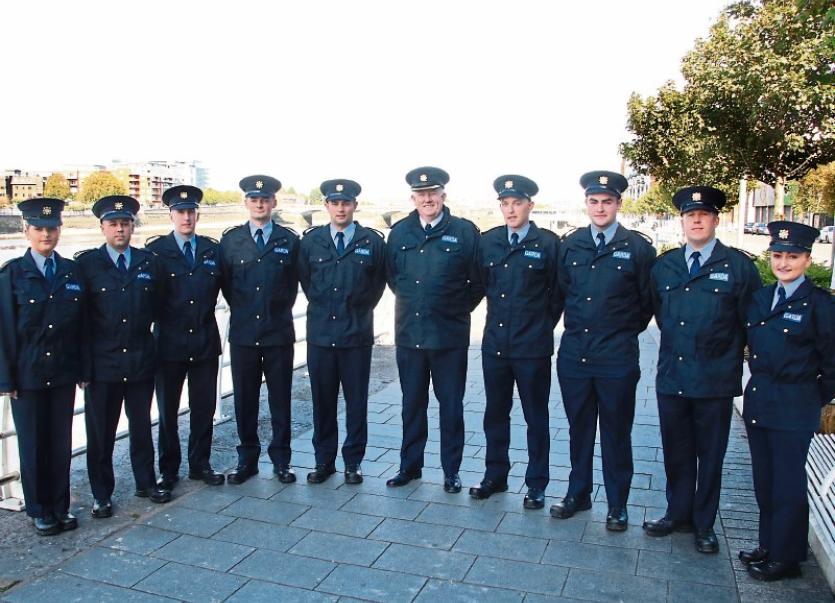 THE head of the Limerick garda division says the decision to deploy new recruits within communities across the city has worked out well.

Chief Superintendent Gerard Roche made his comments this week as he welcomed nine new probationer gardai to the division.

The seven men and two women, who started work last week, are attached to community policing units operating out of Henry Street and Mayorstone garda stations.

The policy of assigning new recruits to community policing duties was made in the summer when ten probationer gardai arrived in Limerick having passed out at the Garda Training College.

“It’s worked out great, people are delighted to see the younger people going out, we have young guards out patrolling at the moment so you will see more visability on the roads and on the streets, so it’s good and it’s working very well,” said Chief Supt Roche.

The arrival of the latest recruits means the available manpower within the Limerick division has now reached record levels.

“It’s all coming together at this stage, we have more people than we ever had in the division before. We now have 714 people (gardai, reserve garda and civilan staff) so that gives me great latitude to fill a lot of vacancies which have been there for quiet a while,” said Chief Supt Roche.

One of the new recruits – Conor Hynes – revealed he had to deal with two drunk drivers on his first day in the job.

One incident happened during his tour-of-duty while the second happened as he was travelling home.

“I had just finished my tour-of-duty and I was on my way home and an accident (happened) in front of me involving an intoxicated driver. Luckily enough there was nobody injured and I just stayed at the scene until a unit came out that was on duty,” said the 29-year-old father-of-three from Bridgetown, County Clare.

It’s hoped the Limerick division will be allocated six more probationer gardai before the end of the year.