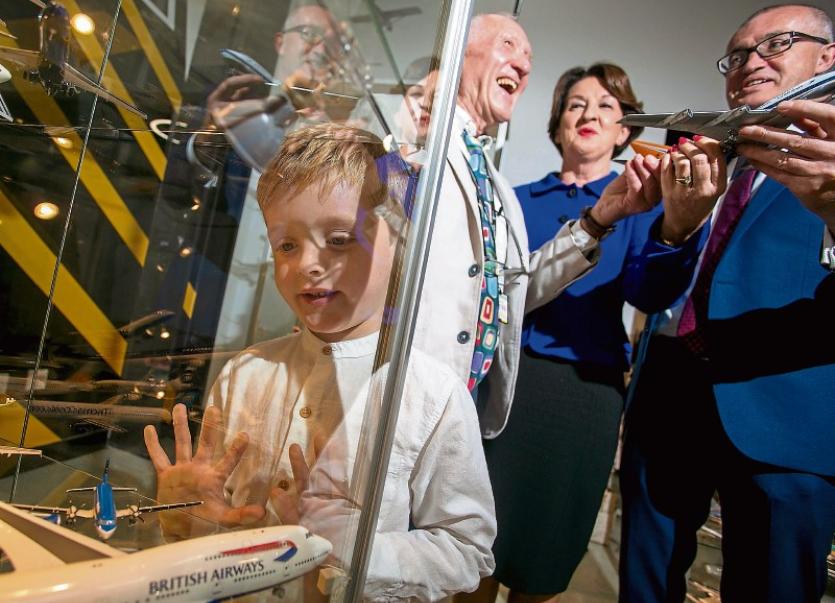 A FABULOUS collection of model aeroplanes collected by Limerick man Michael Kelly went on display at Shannon Airport this week.

Michael, who grew up in from Farranshone and now lives in Janesboro, has spent over €500,000 in his life collecting diecast aeroplanes, with his love of them stretching back to the late 1950s when his family travelled out to Shannon to watch jets take off and land.​

His journey has now come the full-circle as the collection has been permanently located at Shannon Airport, with the exhibition is housed in a dedicated room in the airport departure lounge.

“It started when I was a little boy,” Michael said. “My Dad, god rest him, used to bring me to Shannon Airport. When I saw aircraft I just fell in love with them. Whatever was between me and aeroplanes, it was just magic. The aircraft are amazing.”

He recalled when his aunt was across on holiday in the Welsh town of Aberystwyth, they found a beautiful model shop.

She wrote to his father to tell him of this, and then picked up some small aircraft for the youngster.

At an early age, Michael – who grew up in Farranshone – found work as a plumber and fitter to provide him with the funds to pursue his passion.

He remembers ​being put in touch with a fellow enthusiast based at Heathrow Airport, a Nigel Milton Tomkins.

As a result of this, he saved up more than IR£10,000 and headed across to London’s main airport to meet him.

The unique collection includes model aircraft of 40 years old and more, with all 1:200 in scale and replicas of aircraft dating back to the 1940s.

The launch of the exhibition took place this Tuesday in the Shannon Airport departure lounge, and the planes will be available for all departing passengers to view.

Rose Hynes, Shannon Group chair said: “Shannon is a place of homecomings and this is among the best of them.”