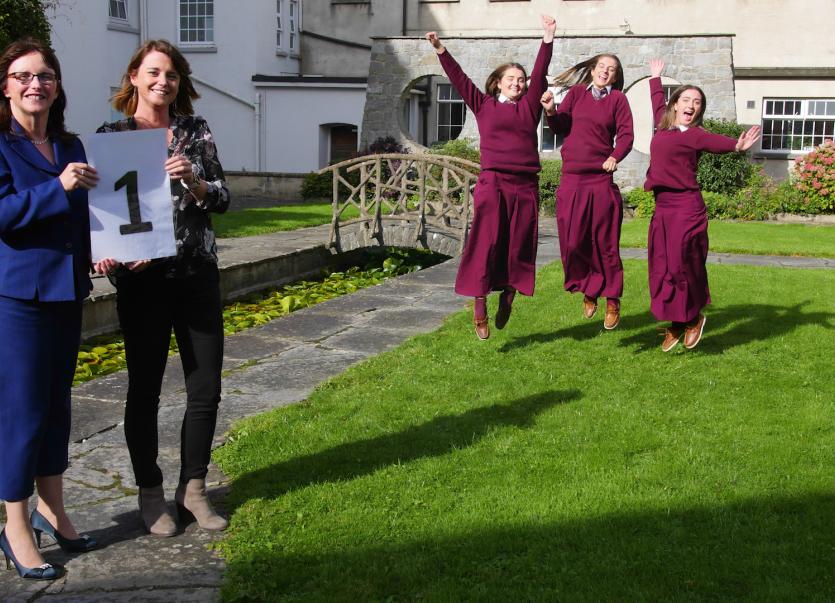 STUDENTS at Limerick's Laurel Hill Coláiste FCJ are jumping for joy after being named the top secondary school in Ireland for a record fifth successive year.

The school, which boasts a 96.4% progression rate to third level, topped The Sunday Times Best Schools Guide, an annual survey described as the definitive guide to the country’s top 400 secondary schools.

It measures the progression of all second-level students over a three-year period – from 2015 to 2017 – to universities and institutes of technology.

The 409-pupil girls’ Gaelcholáiste has been the top school in Munster (excluding Cork) for eight out of the past 14 years.

Expressing her delight with the award, Aedín Ní Bhriain, Principal, Laurel Hill Coláiste, FCJ said it was down to a dedication to high standards and team effort.

"We’re absolutely thrilled. To be the top school in Ireland once is something you are entitled to celebrate for a while but to be there five years in a row reflects the continuous pursuit of excellence and high standards here at the school. It speaks volumes about our girls, about our teachers, about parents.

"To keep those standards up year after year at a school that also has huge ethos around fun and extra-curricular activity, sporting and non-sporting, is a huge achievement.

"It’s all the more remarkable when you consider the capacity constraints we are under and we are going to be addressing that shortly. Two areas we actually excel in, stem subjects and sports, are areas that the government are looking to put a special focus on in relation to girls. We neither have enough labs nor adequate sports facilities to cater for demand, yet we are constantly achieving at this level. Huge credit is due to all who make this happen.

"Our focus will remain on continuing to achieve the highest standards as well as seeking to put in place the facilities that will deal with the existing capacity shortfall. This will also allow us to take in more pupils and not have to disappoint people every year because we are over-subscribed."

Ms Ní Bhriain said that the award comes in a particularly poignant year for the school.

“It's a great year for us in many ways - a great year for Limerick with the hurlers in particular. But it’s a year that has been tinged with sadness for us as a school because we lost one of our famous past pupils Dolores O'Riordan. She meant so much to the school and the school meant an awful lot to her.

“When Dolores was here she had one ambition and that was to be a rock-star. She achieved that and we have a bench here in our garden with the lyrics, 'always be yourself along the way living through the spirit of your dreams', from one of her songs inscribed in it. It’s like a motto for our pupils. Whatever it is you want to do with your life, follow your star. Dolores embodied that and it is what we want for the girls.”

A number of other local schools also fared well in the guide including Glenstal Abbey, where over 75.5% progressed to university making it 22nd in the league table. Next local school was Gaelcholaiste Luimnigh, a fraction behind on 75.4%. Ardscoil Ris also features after Glenstal Abbey with 75.4%.

Next local school was Crescent College Comprehensive on 73.4% and Castletroy on 65%.