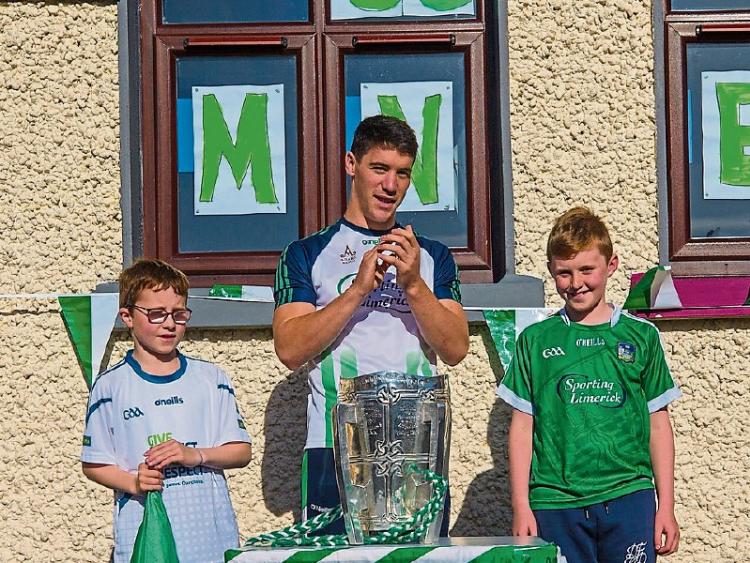 Sean Finn gives flagbearers, Conor and Daire O’Dwyer a round of applause

ALL-STAR-nominated Limerick corner back Sean Finn learned a thing or two about hurling on a visit to Caherconlish National School.

He got a rapturous reception from pupils, teachers, members of the local community including neighbours, Tidy Towns committee, Caherline GAA, past pupils and Caherconlish board of management.

There were two familiar faces to Sean in the crowd – Conor and Daire O’Dwyer, who were flagbearers in Croke Park as the Limerick team ran onto the pitch.

David Tynan, who is currently on his final year student teacher placement, brought in a hurley which belonged to 1973 sub Limerick goalkeeper, Andy Dunworth from Claughan.

Principal of Caherconlish National School, Pa Ryan said it was great to have a physical connection to the last time Limerick won the All-Ireland.

He asked Sean what he thought of the hurley.

“The bas is very narrow although it is the same length as the hurley I use,” replied the Bruff man. 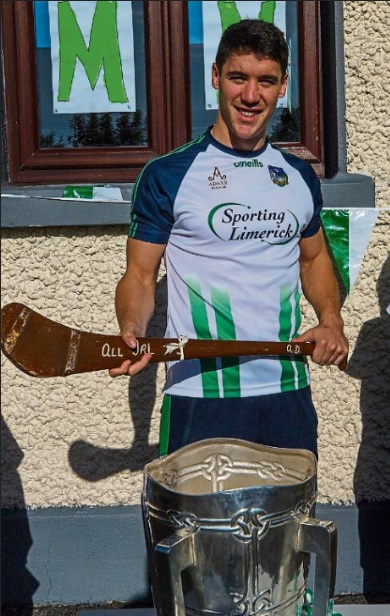 The pupils sang Limerick You’re a Lady and Dreams by the late Dolores O’Riordan and the Cranberries.

“It was a fantastic day and Sean posed for pictures and signed autographs for everyone on a lovely sunny morning. Sean answered numerous questions from the boys and girls,” said Pa.

“If you didn’t play for Limerick, what county would you like to play for?” she asked.

Sean said that he has a lot of friends in Offaly who are passionate about hurling and that it would be the county he would choose if he couldn’t play for Limerick. Thankfully there is no fear of that with Sean set to wear the number two green jersey for many years to come.

Pa spoke to the pupils about the importance of playing with your club as this is where “all county players start and finish up”.

He stressed the importance of finding some sport to play or some physical activity to get involved with, especially as Caherconlish is an Active school.

The principal thanked Sean and congratulated him and his county teammates on behalf of everyone in Caherconlish for bringing the Liam MacCarthy Cup back to Limerick after 45 long years.

And of course there was no homework that evening!