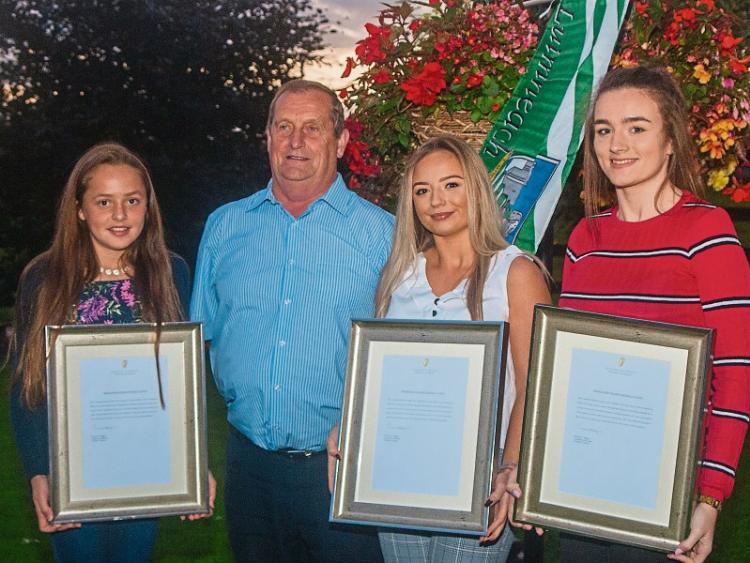 TEARS instead of tea poured when a letter from President Michael D Higgins praised three girls for their role in Ireland’s longest coffee ‘morning’.

Mike O’Donoghue started the fundraiser - which runs from 7.30am to after midnight - four years ago in his Pallasgreen home. Saoirse Corbett, aged 19, Tara Campbell, 18, and Sarah Dillon, aged 13, have been involved since the beginning. All the monies go to the Irish Cancer Society.

The girls are on hand from dawn ‘til dusk pouring tea or coffee, serving apple tart and cake, and chatting with all the callers. Mike said the letter from President Michael D Higgins came in his door one morning.

It reads: “May I commend Saoirse Corbett, Tara Campbell and Sarah Dillon for their fundraising efforts for the Irish Cancer Society. Through their dedication and work, sustained over a number of years, they have demonstrated remarkable solidarity with and commitment to others, and have done so with energy and enthusiasm. They are a wonderful example to their community and so may I wish them the very best in their continuing efforts.”

It is signed by the President himself.

“That letter came in my door one day. I opened it and the tears flowed. Five minutes later Fr Pat Burns rang me about something else. I told him what had just come in the post and he said we will have to do something to honour these three girls,” said Mike, who organised a special night in his house for their family and friends last week. Mike kept it a secret from Saoirse, Tara and Sarah.

Before handing over the framed letters he said: “I don’t think we could give them to three better girls than these three. We’ve had a coffee day for four years and without them it would never have happened or continued - I mean that from the bottom of my heart,” said Mike.

Tara said her framed letter will go up on the wall in the kitchen where everyone can see it.

“It is unreal. The school day today dragged because I was wondering what it was,” said Tara.

“I had no clue. I said to Mike, ‘Will you just tell us!” laughed Sarah.

Will they all be back for the longest coffee morning in Ireland next year?

“Definitely!” they say in unison.

Mike declares: “We’re going for the Guinness Book of World Records next year.”

The commendation from President Higgins started a great week for the parish as Pallasgreen GAA Club welcomed the Liam MacCarthy Cup on Tuesday night.