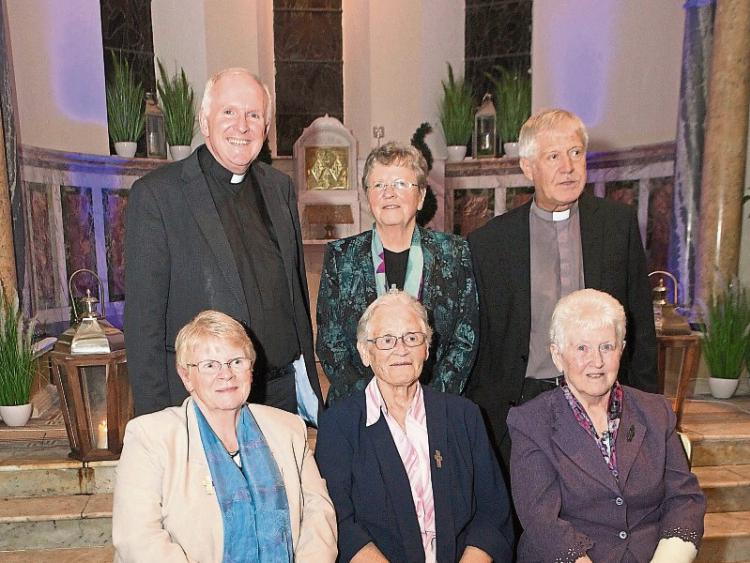 A “BITTERSWEET” moment is how a Mass of Thanksgiving in Bruff was described as it signalled the end of a 162-year presence of the FCJ community in the town.

“When I use the word ‘bittersweet’ to describe this moment – it is with great sadness that we are all gathered here to say this farewell to the parish community of Bruff, Grange and Meanus,” said Bríd Liston, FCJ  Area Leader, FCJ Sisters in Europe.

The nostalgic celebrations began with a Mass of Thanksgiving for the 162 years of FCJ presence and ministry from 1856 to 2018.  David Sheehan, Chairperson of the Pastoral Council, welcomed the concelebrants: Fathers John Daly, Jim Costello, Paddy Donovan and Bishop of Limerick Brendan Leahy. Mr Sheehan thanked the sisters for their years of ministry  and shared some personal memories of the FCJs with the congregation.

The history of the FCJ community in Bruff offers a fascinating account of life between 1856 and 2018.

“In its own way, it is reflective of the life of the wider community and the culture of Irish society over a century and a half of her history as depicted in publications produced for the 150th anniversary and for the closing of the secondary school,” Bríd explained.

In the region of 200 people gathered in The Kennedy Rooms of the old FCJ convent on Saturday last, following the Thanksgiving Mass, including many FCJ sisters, formers pupils, former staff members and parents. They  heard how the first group of sisters who arrived to the town in 1856 took up residence in Crawford’s Lane, where Dean Cussen’s mother lived.  “Sisters started to work immediately in the primary school which had begun some years earlier. A few girls came as boarders almost immediately and soon they had to rent another building on the main street. The interest and demand for education was so great that Dean Cussen with the help of the parishioners and money sent by our foundress Madame d’Houet purchased the land on the left bank of the Morning Star River,” Bríd continued.

“In the 20th and 21st Centuries, FCJ sisters and their colleagues provided the benefits of a well-balanced and all rounded education for the young women and men of the area and those further afield who came as boarders to the school.”

Speaking on behalf of many past pupils of the school Bríd said school life in Bruff was “happy, life-giving and filled with companionship”.

“Sisters Mary Breen, Veronica Carey and Geraldine Lennon, you are the FCJ Sisters who have lived here in recent years in companionship with our Sisters in Limerick. We know this is not an easy time for you but be assured of our prayer and support as you pack your cases and head for new pastures in the city. I know our Companions in Mission, friends, neighbours and colleagues, and FCJ Sisters have been a great help to you as you face these moments of letting go and looking to a new future in Limerick” Bríd said of the Sisters who have relocated to Laurel Hill in the city.

“Three former students were part of the first team to win an All-Ireland hurling final for Limerick after 45 years,” said Bríd.

“Life is fragile and a single moment is enough to change everything,” she continued. “We all need each other, we all need to watch out for each other. It is over to you now.”