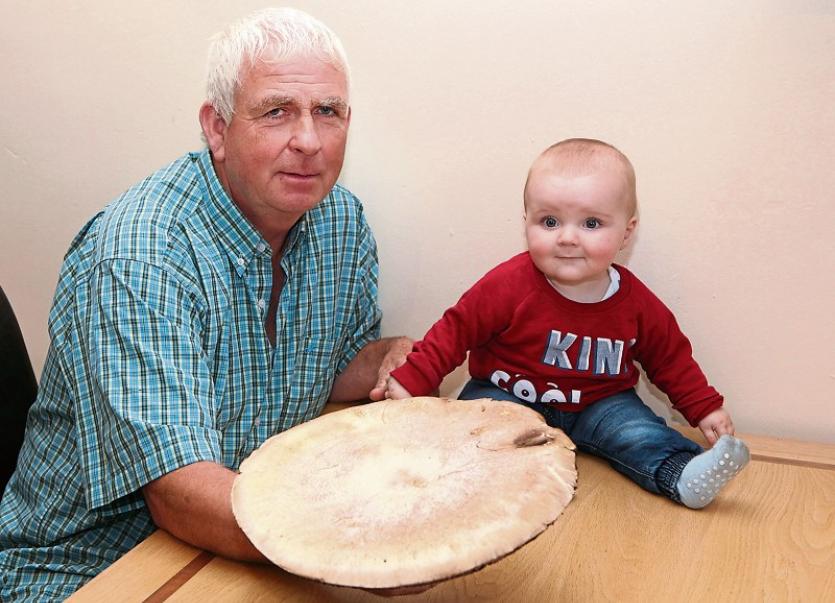 Is this Ireland’s largest mushroom? Tommy O’Connor, who found it, is pictured with his seven-month-old grandson, Tommy Picture: Dave Gaynor

COUNTY Limerick darts player William O’Connor’s talent is mushrooming after he beat the world number one at the weekend but his dad isn’t far behind him.

Tommy O’Connor, of Mullally Lawn in Cappamore, found this massive mushroom that must have looked like a flying saucer that had landed in the field. It weighs a whopping 836 grams.

Maybe it proved a good luck charm for his son as William beat Michael van Gerwen 6-1 on Sunday. William’s nickname is The Magpie but his dad thought a flock of seagulls had landed as the mushrooms were so plentiful.

“The old show field in Cappamore is absolutely full of them. I pick them every year. There are buckets and buckets of them there this year.

“I could see the mushrooms from about 300 yards away. They were like seagulls in the field. I could see about 20 of them.

“I went down and I saw this real big one. I said I will bring it on because I never saw a mushroom as big. I couldn’t even put it in to the bucket,” said Tommy, who gives the mushrooms he collects to his neighbours and to his wife, Eileen, to make soup.

Tommy puts the monstrously large funghi down to the scorching hot summer and recent rainfall.

“I could collect seven or eight buckets of them in an hour. It is full of them. It’s definitely one of the best years for mushrooms,” said Tommy, who found it on Friday.

His daughter, Emma said she got a phone call from her father.

“He was all excited about this huge mushroom he had found. I said, ‘Will you go away’ but the next thing he arrives in with the mushroom.

“I actually couldn’t believe the size of it. It was actually so big I was thinking how could you cook and eat it,” laughed Emma, who has a seven-month-old son also called Tommy, pictured with it.

Emma googled “Ireland’s largest mushroom” and found a story from 2015 in Mayo. It was found by a doctor and weighed 189 grams. Emma put their mushroom on the scales and found it weighed 836 grams.

Theirs is so big that William could easily use it as a dartboard to practice on!