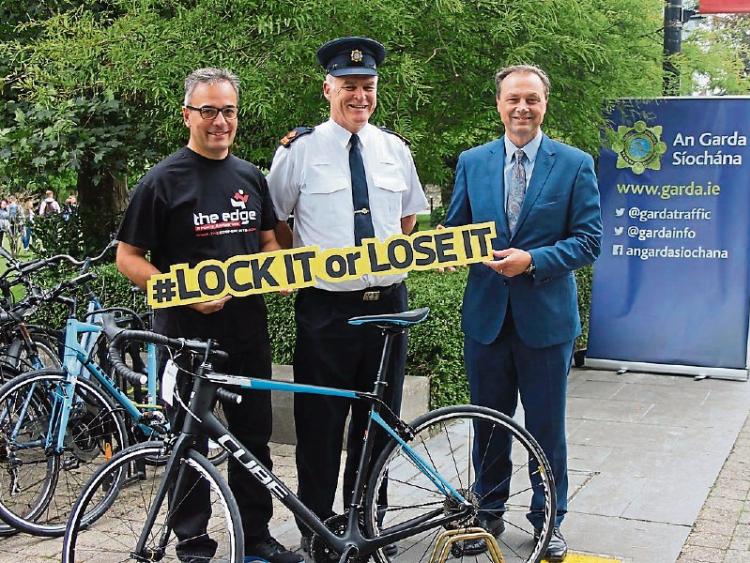 An analysis of reported crime figures show almost 700 pedal bikes have been stolen across Limerick since the beginning of 2016.

The figures, released at the launch of the ‘Lock it or Lose it’ campaign, show that 646 pedal bikes were stolen in the Limerick division between January 1, 2016 and June 30, 2018.

An analysis of offences across the country shows 52% of bikes are stolen on public streets while 32% are stolen from homes.

“We are appealing to everyone from the pros to the Sunday cyclist to lock their bikes as securely as possible. There has been an increase in the number of people cycling over recent years but unfortunately there is poor awareness of bike security. Nowadays with cycle-to-work schemes, people are investing in more expensive bikes so it makes sense to invest in quality locks to prevent bike theft,” said Sgt Tony Davis.

As part of the campaign, gardai are urging cyclists to spend between 10% and 20% of the value of the bike on two locks and to ensure it is locked tightly to an immovable object.

There is a also a particular emphasis on encouraging students to secure their bikes.

Cyclists are also advised to take photos of their bikes and to record the serial number which will help in the event of it being stolen.

“Of the 14,000 or so bikes stolen (nationally) since 2016, we have only approximately 16% of the bicycle frame numbers recorded,” added Sgt Davis.