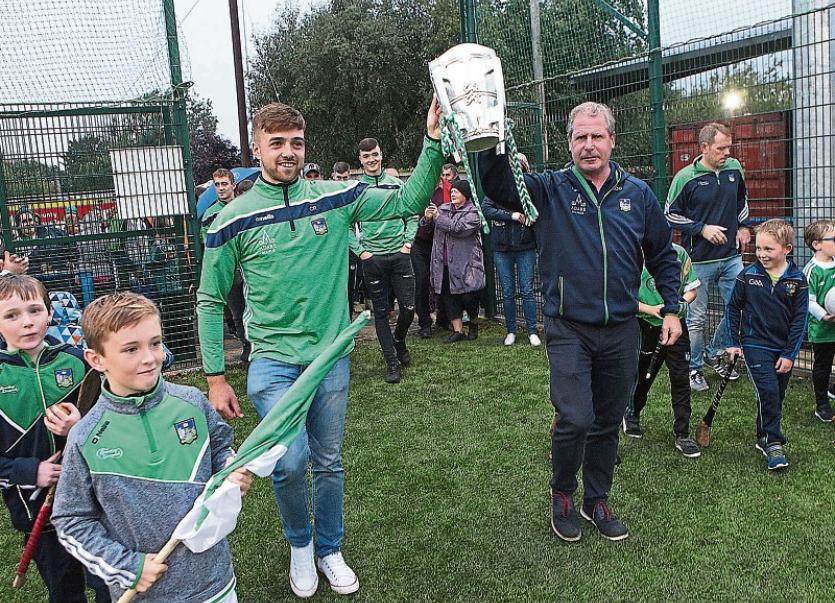 THE RAIN lashed down at Pallasgreen GAA’s homecoming for their player Colin Ryan “Malachy” and kitman Ger O’Connell on Tuesday evening but one little boy summed up the mood.

He had a Limerick jersey on his back, a caman in one hand, an ice cream cone in the other, eyes focused on his heroes and not a care in the world.

Colin and Ger were joined by Richie English, Pat Ryan “Simon” and Barry Murphy from Doon.

Darragh O’Donovan came down the road from Oola while Shane Dowling travelled from the city and Kyle Hayes went east from Kildimo-Pallakenry.

They met up with Ger and Colin near the plaque to another thoroughbred, Foinavon, bred in Pallasgreen. The N24 came to a standstill as they jumped aboard one of Cappamore Fire Service’s trucks. They passed a statue to another local hero, Paddy Ryan who won Olympic gold in the hammer throw in 1920.

The parade, led by a piper, included a large contingent of Pallasgreen GAA juvenile club players. They swung left off the main road and left again into the GAA grounds.

A large, cheering crowd awaited them on the astro-turf pitch. The noise got louder when Colin and Ger held the Liam MacCarthy Cup high up in the darkening sky. Flag bearer in Croke Park, Noah Deere was also up on the stage.

Michael Ryan, principal by day and MC by night, welcomed Ger and all the players.

“How does it feel?” he asked Colin, who starred in the league against Clare with three points. He also scored the winning 65 in the historic sudden death shoot-out.

“It is a great feeling,” said Colin.

“It is great to see everyone and thank ye all for coming out. It is unbelievable. This is a pretty special, 45 years is a long time so it is great to be part of it,” said Colin, whose mother and father, Denis and Mary, were called up on stage by the MC.

Denis was a fine hurler as was his father, Tom who won an All-Ireland junior hurling medal in 1935.

Pallasgreen had no representatives in 1973 but they did have Dick Stokes in 1940. And they had four in 1918 – Paddy Kennedy, Mick Bourke, Chris and Dick Ryan. Relatives, Harry Kennedy, Frances Bourke and Jill McCormack were all invited.

Ger thanked all the players and hurley carrier, Alan Feely, for coming to their homecoming in Pallasgreen. Ger has been the kitman since 2007 and his attention to detail has been praised by all the management and players. He left Pallasgreen on the day of the All-Ireland at 4.30am.

“It is a pleasure to be involved with such a nice bunch of guys. There is a great bond between players and managementI,” said Ger, whose message was “never give up”.

“The lads never gave up and now they have All-Ireland medals in their pockets,” said Ger.

Michael Ryan asked Shane Dowling who is going to win in 2019.

”I’d love to stand up here and say we are going to win but you need so many things to go right for you. You need good, management, good county board and good backroom team,” he said.

“We had that this year, last year and other years as well.

“You need a serious group of players from 1 to 36. The one thing I firmly believe you need is a bit of luck. If you go back through all the games we had a bit of luck this year. It was probably long overdue. The team that wins next year, without being a politician, is the team that is going to have everything but also gets that bit of a luck,” said Shane.

One of the loudest cheers of the night was kept for the end. Colin asked the crowd to give their appreciation for Daragh Fanning who was on the league panel and the full-back on last year’s U-21 All-Ireland win.

The rain continued to fall but the players signed every autograph and posed for every photo.

See page 45 of L2 for more pictures from the homecoming