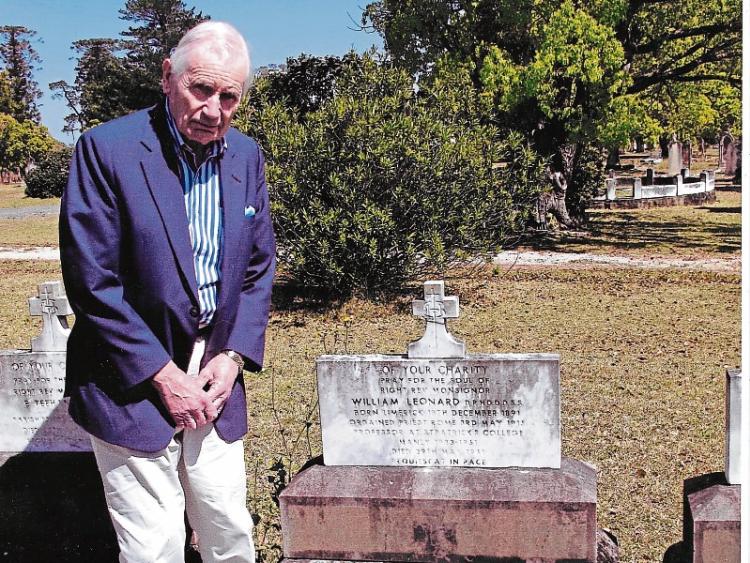 IN JUNE 1961, a casket was carried down the steps of St Mary’s Cathedral, Sydney. Cardinal Gilroy, with mitre and crosier, led the funeral procession.

The casket carried one of Australia’s great Biblical scholars, Dr William Leonard, a theologian, academic and priest who taught at St Patrick’s Seminary, Manly for decades passed, the story of Dr Leonard moved from legend to memory to being almost forgotten.

Although he suffered from a kind of paralysis that rendered speechless and immobile, the Irish-born priest who achieved a reputation as a great writer and a multi-lingual Biblical scholar maintained an extraordinary devotion to the Holy Mass.

He would, for example, celebrate Mass at 4am and attend up to four Masses a day.

The mystical experience emanating from his Masses was very much etched in the memory of John Leonard - his cousin from Corbally who attended his 6am Masses at the Leonard family homestead at Ballycraheen, Ireland. “Dr Leonard became immobile - went into a trance-like mode and looked to be in pain,” he says, “It was perceived that he was suffering Christ’s passion on Calvary.”

His apprehension of the divine was mostly apparent on Fridays, Australian historian, Fr Edmund Campion SJ, notes that each Friday brought him to share in the Passion of Christ. On other weekdays, priests who entered the Manly chapel noticed Dr Leonard in a corner behind the door, totally engrossed in another world, apparently wrapped up in God.

Born in Ballycraheen, Ballysimon in County Limerick, Ireland, on 18 December 1891, Dr Leonard was the eldest of six children.

Ordained for the Diocese of Limerick in 1915, he went on to complete two doctorates in Divinity and Philosophy in Rome. In 1923, he made his way to Sydney to teach at St Patrick’s Seminary, Manly.

Later he embarked on a journey to the Pontifical Biblical Institute, Rome, to gain the then-rare distinction of a doctorate in Sacred Scripture. Upon returning to Sydney in January 1939, he served as a Professor in the Faculty of Theology, Archaeology and Hebrew at St Patrick’s. In 1961, he died at Lewisham Hospital, following a heart attack.

His brother, Fr Timothy Leonard, was a Columbian missionary who suffered a cruel death at the hands of the Communists in China in 1929 while celebrating Mass. When another priest warned Fr Timothy of the peril that awaited him in China, he responded “what is it but a bad quarter of an hour - think of the reward.”

When the news of his brother’s death reached Australia, it was said Dr Leonard stood in front of the altar of the Irish Saints at St Mary’s Cathedral, eyes filled with tears but a warm smile etched on his face.

“Rejoice with me John,” said Dr Leonard to his colleague, “we have a martyr in the family,” he immediately wrote to his mother in Ireland, saying “Congratulations Mam you have become the mother of a martyr.”

Leonard was also a great friend of the Maronites - attending an annual Mass in 1961 at St Maroun’s Church, Redfern, with over 2,000 in attendance. In that ceremony, Bishop Muldoon said that Maronite and Irish people were very similar, in that both suffered for their faith but had treasured it; “It is only in the crucible of suffering that is formed the spirit of steel that is strong to resist in the hour of trial,” said Bishop Muldoon.

Dr Leonard also had a great devotion to the Second Heart of Jesus.

In his 1948 Catholic Weekly publication. ‘A synthesis of devotion to the Sacred Heart;’ he wrote “the cross is hard, but all the same it is the only source of a peace and joy which nothing can take away.”

In all his excellence and wisdom Dr Leonard was an immensely humble man.

His former student from Manly, Father David Coffey, now 83, sharply recalls that his memory of Leonard was that “he was a very kind, good man, simple but brilliant. He lived in another world, different to the one we live in.” Last November, my mother and I were walking through Rookwood cemetery praying for the Holy Souls.

Passing the statue of St Michael the Archangel beside the graves of priests - one grave stood out, with a beautiful plant growing next to it: the grave of Dr William Leonard.

Weeks later, our parish priest mentioned to us that Dr Leonard was a holy man, a mystic, and with this. I started a quest, unearthing all I could about him.

I started interviewing elderly priests, researching archives and newsletters from Ireland, and when I interviewed Fr Coffey, he remarked that just that week he had been pondering upon the literary works of Dr Leonard. “I think a few strings must have been pulled up in heaven,” he said.

In the modern era, the persecution of the Church is not so much visible in the blood of martyrs but in societies that uses the ostensive power of the State to curtail religious freedoms and liberty, with the political Left aggressively seeking to ban religion from the public sphere.

It is the faith of figures such as the Irish scholar priest Dr William Leonard that we need so much.

Georgette Bechara is a journalist with Catholic Weekly in Australia where this article was originally published.