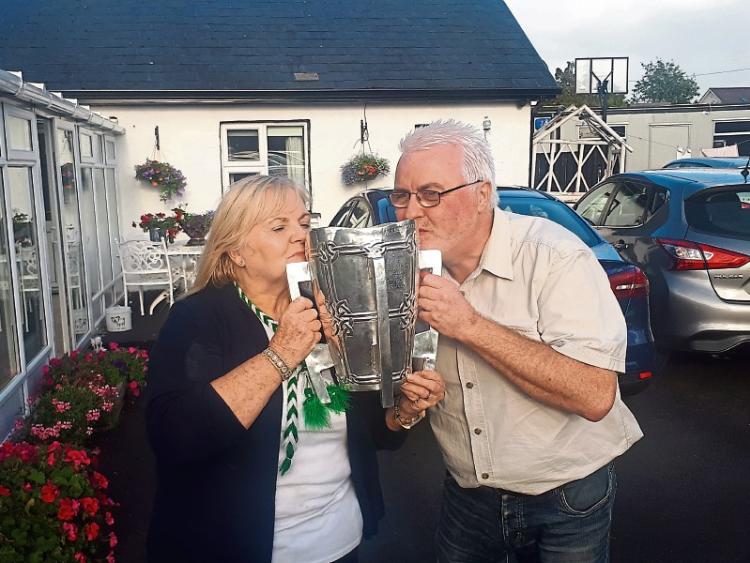 Eileen O'Riordan, mother of the late Dolores, and her son Joe kiss the Liam MacCarthy Cup after it arrives at the family home

NOREEN O’Neill was baking a tart in her kitchen when the phone rang.

Herself and her husband Flan, a former assistant city manager, immediately got into the car and drove the short distance to the O’Riordan family home in Ballybricken.

An hour earlier, Noel Hartigan, games development manager with Limerick GAA had driven past the electric front gates at the home and lifted the Liam MacCarthy Cup from the passenger seat.

In a special gesture by Limerick GAA, Eileen O’Riordan, the mother of the late Dolores and her family were allowed some private time with the cup, won in battle by the Limerick senior hurling team on August 19.

“We got a phone call. I was baking an apple tart. It’s still in the oven,” smiled Noreen as she examined the coveted cup, standing in the yard of the extended cottage.

It was here, as a young girl, that Dolores O’Riordan would get stuck into her five brothers during a game of hurling.

“She was a great hurler. Oh she was tough! She. Was. Tough,” commented Dolores’ mother Eileen in the kitchen of her family home.

All around her are family members, friends and close neighbours. The counter is covered with trays of sandwiches and cups of tea.

They had gathered in the same house just last January to wake their beloved Dolores, but on Thursday evening there were happier scenes to behold.

“ She is crossing my mind all the time today - but not in a sad way. It’s a pity she isn’t here. She would be singing,” added Eileen of her beloved daughter, who conquered the world with her unique voice as the lead singer of The Cranberries.

When word went out that the MacCarthy Cup had finally arrived at the Ballybricken homestead, neighbours and friends dropped what they were doing and headed off on foot or by car.

Chris Keogh arrived wearing the same flat cap he wore at the 1973 All-Ireland final. Chris, 80, came home from California especially for the final.

“I kept the cap over in America all this time - it’s been really special to me. I hung it over an Ireland cap I have over in the States. The Ireland cap is full of potholes but this is fine. I bought it outside Croke Park in '73. They were selling the old paper hats and I was up in the Hogan Stand and I think I was the only one who was dry that day.”

Chris had been watching the Limerick games all through the year on GAAGo. He felt there was “something special” about this team.

“There was something about them and I was delighted to be home to see them in the final. I’m staying up with John, the brother. It's tremendous to be here,” he smiled.

Dolores’ nephew Alan O’Riordan, who plays with Ballybricken was delighted to get his hands on Liam. Alan attended all the Limerick games except the Clare game. “I was on holidays for that but I was at the rest of them, so I might be a bit of a good luck charm,” joked Alan, who was minding himself ahead of the East hurling final on Sunday night.

The five-year-old was in bed when Eileen’s granddaughter Katie popped in to tell Nicola’s mum and dad, Jennifer and Kevin, of the famous guest at her nana’s house.

“She had to come over. She wanted to know if it was the real life cup,” smiled Jennifer.

In the hours and days following the All-Ireland final many commented that the late Dolores O'Riordan has been somewhat of a “secret weapon” for the Limerick team this year.

“Dolores always went to Limerick hurling matches. She was an avid fan - sure she was a tomboy,” smiled Eileen as she recalled the historic victory in Croke Park.

“They told me beforehand on the Sunday of the final that it was Linger they had played at the matches up to that because they had lingered so long, waiting to win again and they said they had kept Dreams for when the dream would come true. And now they are All-Ireland champions and isn’t it great?” said Eileen, who attended the match with her sons Joseph and PJ and her grandchildren.

“I was delighted when they finally won. I couldn’t look for the last 10 minutes. Isn’t it great? It’s only now I’m beginning to believe that we won. It’s a great lift. I was praying to Dolores, ‘I hope this goes well for us’.

“We always went up to Croke Park when the children were growing up. Dolores used to go a lot.

Dolores and her group The Cranberries also provided the soundtrack for the euphoric homecoming scenes at Colbert Station in the city on the Monday evening of the homecoming and later that night in the Gaelic Grounds.

Prior to the team being introduced to the 40,000-strong crowd of jubilant Limerick supporters, on stage at the Ennis Road grounds, they sang in perfect unison to a highly emotionally charged rendition of Linger. Moments later again, a raw rendition of Zombie lifted the roof of the Mackey Stand.

As the crowds filed out of the Limerick stadium on the Monday night, and happy fans headed for home, the harmonies of the girl from Ballybricken who conquered the world lingered softly in the Limerick air.