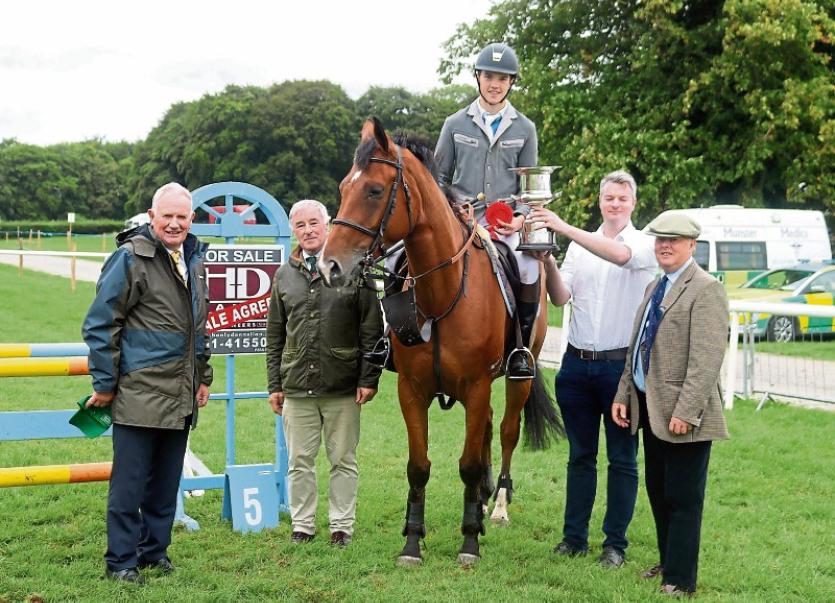 A NEW name will be inscribed on the Limerick Leader Cup, first presented in 1946.

Conor Costello, aged 17, won the Grand Prix at Limerick Show, sponsored by Hanly Donnellan Auctioneers. Conor, from Newmarket- on-Fergus, rode Annestown Clover Concorde to victory. He remarked on what a wonderful cup it is. “Thank you for having me at Limerick Show,” said Conor. The cup is over four times his age.

Bill Hanly, of Hanly Donnellan Auctioneers, said he was very proud to sponsor the Grand Prix. It is also Mr Hanly’s first year as chair of the showjumping section at Limerick Show but his involvement goes back decades.

“I’ve been involved with Limerick Show since I was 14 - over 40 years showing horses and helping out. The Grand Prix is a very important part of Limerick Show and there is a big entry here to jump for it,” said Mr Hanly, who had the cup sparkling for the occasion.

“A Colonel Lewis won it in 1946. Noel O’Dwyer, a neighbour of mine in Ballysimon won it in 1957. He is a son of Major Ged O’Dwyer who jumped internationally. A lot of famous names like Tommy Wade and Francis Connors are on that cup. Eddie Macken jumped for it,” said Mr Hanly.

Norman Wheeler, of the showjumping committee, remarked on the age and quality of the cup.

“Last year it wasn’t jumped for because there was no Grand Prix. It is restored again now and an even bigger Grand Prix is planned for next year. We are very privileged here - we are in the most mature parkland in County Limerick in the old Greenmount Estate,” said Mr Wheeler.

While there was a fine crowd watching the showjumping, Mr Hanly would like to see more people coming out from the city and see how well all the animals are presented and looked after.