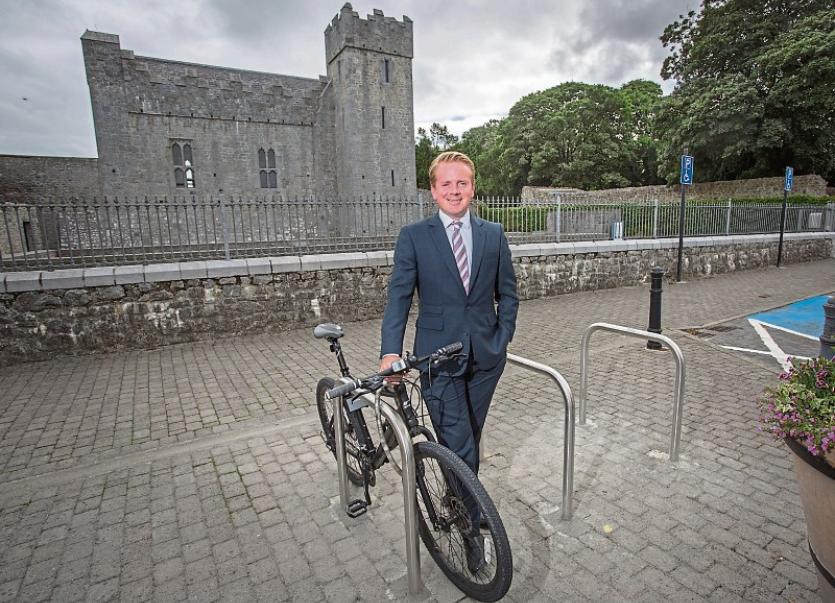 Rossa McMahon pictured at the new bicycle stand in the Square, Newcastle West

Mr McMahon emailed the council about a month ago suggesting a stand and when he returned from holidays ten days ago, there it was in the Square. And he was delighted to be among the first to use it when he returned to work.

When he made his suggestion to the council, he pointed out that Newcastle West was a big town but that there was nowhere in the Square, Market Yard or the Church St car park to park a bicycle. “You can charge an electric bike there, you can park a motor bike there but there is not one place to park a bike,” he explained.

He also pointed out that the good work done by the council in developing and promoting the Great Southern Greenway would result in  more cyclists coming into town.

“The Greenway has a spur that takes people right into the town via a housing estate, but anyone who does has nowhere to securely park their bikes when they do reach the town,”  Mr Mahon said.

It would make sense, he suggested, to have a bicycle stand in place, instead of people having to chain bikes to poles where they could get in the way or get bashed by cars.

“Many children in the town cycle, but have nowhere to park their bikes, not to mention older members of the community who cycle into town,” he added.

“However, some practical measures are needed to encourage and facilitate cycling as an every-day mode of transport for residents, rather than just leisure cycling.

Bike parking, Mr McMahon argued, would bring about many benefits, by facilitating and encouraging cycling generally and thereby  reducing the traffic burden.

“I thought I might get no response or that it would be considered. But I got an email within two weeks saying we will install it next week. And it was done. That is fantastic,” he enthused.

Padraig Valelly, senior executive engineer for the Newcastle West Municipal District, said they hoped to put stands in other towns and villages in time.