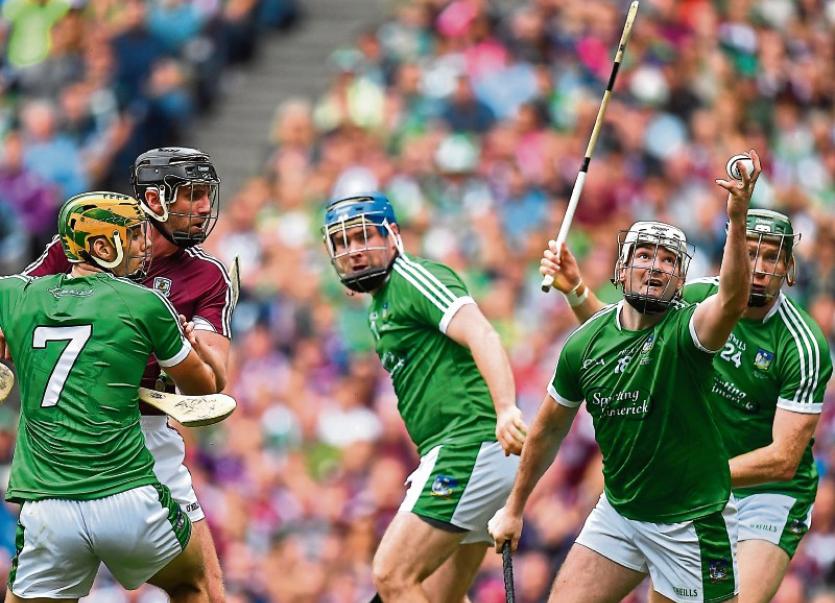 Tom Condon of Limerick catches the sliothar on the last play of the game in the All-Ireland final Picture: Brendan Moran/Sportsfile

A SIGNIFICANT milestone was passed on Sunday, when Tom Condon accepted his All-Ireland medal and in doing so, carved his name into the history annals of his Knockaderry club.

He will also be remembered by grateful Limerick fans for the way he caught the sliotar from the  long-range, last-gasp free by Joe Canning, sending it clear and allowing Limerick hearts to start beating again and his team to claim victory.

“If a Galway man had caught that, it could have been in the back of the net,” Knockaderry GAA club secretary Ger Corkery pointed out. And there was pride that one of their own, who had come off the subs’ bench, had played his part in ending the drought.

“We were delighted. He played an important role.”

Ger is very conscious that a small bit of parish history was made on Sunday. “Tom is definitely the only person to bring a senior All-Ireland hurling medal to Knockaderry,” he declared. “It is brilliant for him and for the club.”

“We are a small club in comparison with the likes of Ahane or Kilmallock,” he added. “It is great to have an All-Ireland winner in our ranks. We are punching above our weight.”

He paid particular tribute to Tom’s determination to get back on to the panel after he became ill last January and lost his place.

“It was very hard to get it back,” Ger said. But Tom was determined to do so and eventually got his place back.

But it is not the first time Tom has brought honour to his club, Ger continued. “He has gone through the good days and the bad days,” he pointed out.

In 2009, he made his debut with the senior team as a sub, the year Limerick fell to Tipperary.

He won a National League Division 2 medal with Limerick in 2011, and a Munster Senior Hurling medal in 2013.

After such hard work and so much heartache, the joy and the satisfaction now run even deeper.