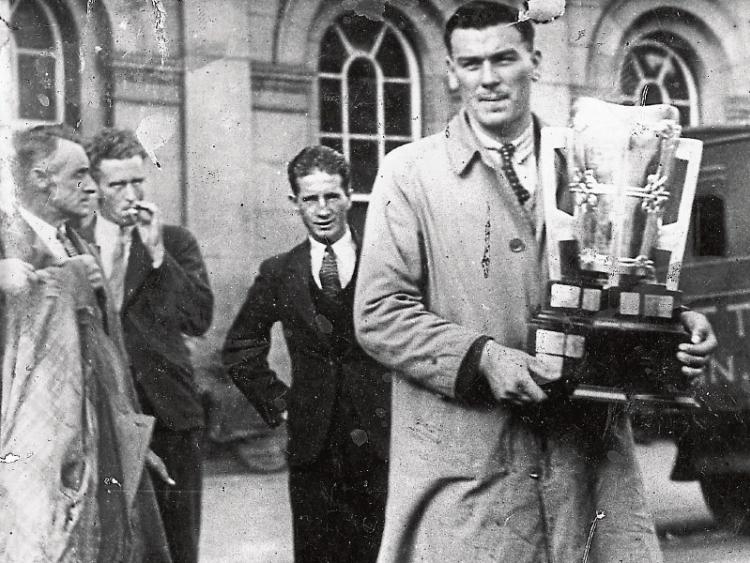 The Irish Free State in 1934 was anything but a liberal country.

In February of that year, Dublin Corporation debated a letter from the Gaelic League asking for a ban on the broadcast of jazz music on the grounds that it was contrary to the spirit of Christianity and nationality.

The following month the National Athletic and Cycling Association decided to ban women from taking part in any sports events and meetings. An application to obtain permission for deposed Soviet leader Leon Trotsky to live in Ireland was turned down.

The country was in the grip of a worldwide devastating recession and with members of the Garda Siochana facing a one third cut in wages in a short period of time, it was decided at a special meeting in Limerick to take drastic action if this came about. However, Gaelic games went on unabated and Limerick had reached the All-Ireland Hurling Final against Dublin. With money so scarce, the prospect of supporters getting to Croke Park for the match was remote. Unable to afford the price of a train, fans in the St John’s parish area decided to hire an open lorry, forms down the middle, canvas cover in case of rain. The fare, ten shillings a head, procured after much scrimping and scrounging.

The late C. B. McKernan, a passenger on the legendary trip, recorded the day’s adventures, or misadventures to be more specific.

“The lorry arrived at eight-thirty am that Sunday. What a thrill we got as we scrambled aboard and secured seats on the forms provided! The more senior passengers were given first preference for the comfortable positions.

“The very young made cushions of their coats on the floor. The entire avenue turned out to wish us luck. The green flag was raised to resounding cheers.

“It was 9 o’clock when we sallied forth. We had been to early Mass and packed a few sandwiches. There would be nothing to eat until after the match. Sweeney, the driver, was cautious. He had a heavy load, so he decided to take the quieter roads. We went through Cashel. We met the Archbishop on the road, walking back from Mass. He blessed the passing lorry. Shortly after, disaster struck. We came to a sudden stop as a tyre exploded. We looked at one another in awe – surely it wasn’t his Lordship. There were comments about the ancient rivalry between Tipperary and Limerick.

“ Paddy Mick Ryan, whose origins were inside the Tipperary border, laughed and said that of course his county had enlisted supernatural support against our team. The driver hustled us off the lorry to stretch our legs while he changed the wheel. He told us to exercise our tongues too and start pleading with St. Christopher for his support.

“Soon we were on our way again. The sun appeared and our spirits rose. On entering the square of the next town, our soaring spirits once again sank into our boots; we had two more flat tyres! It was 1 pm. We were still 40 miles from Dublin. Our dream match was only two hours away. The driver, with the authority of a sergeant-major, marshalled his troops and buckets of water. Those past the age of strenuous work joined the locals in the nearby pub. They supped pints and peered through the windows while the repairs were being carried out and we took turns to pump up the tyres.

“Our elders, two pints later, were placed aboard and we were off again, with the hearty cheers of the locals ringing in our ears. The next few bad patches of road were treated with respect. Only the elderly were allowed stay on board while the driver steered though cut stone chippings. He shouted encouragement at us. We kept up with that lorry as if she was a stage coach carrying bullions of gold.

“The last few miles of our journey seemed to grow longer, the seconds ticked ever faster. Each pothole hurt not only our posteriors as frayed tempers snapped with each toppled poise. Ned Ryan, who was known as ‘The Curser’, hurled maledictions on the lorry, the roads and the driver. He, in turn, blamed ‘the bunch of magpies’ he had taken aboard.

“We arrived in Dublin city with four instead of six wheels intact. There was a frantic scramble off the lorry and a mad rush for the ‘Park.’ One man, who had taken an extra pint, jumped on a tram. He later said he listened to the match on the radio in the comfort of a pub near the Phoenix Park. Another, less fortunate, caught his trouser turn-up on the lorry, struck his head on the pavement and spent the evening in Jervis Street Hospital. He got seven stitches.

“With a companion, who knew the way, I ran like hell to the grounds. We arrived panting brandishing our banner. It was half-time. The attendant let us in for half-price; we had to jump over another stile. The match was restarted. Breathless though we were, we opened our throats and let out the roar. ‘Come on Limerick.’

“Nearby spectators jumped with shock. There had been a lull in play. They said we brought the excitement back. The result was in doubt until the final whistle. It was a draw. I was relieved. The excitement of the match was instantly replaced with the anticipation of the replay.

“Flat tyres were not a feature of the journey home, but rain and sudden gusts of wind were. We huddled together. Outbursts of song took our minds off all the drips and trickles. Our chorus rose to a grand crescendo when we reached home. It was after midnight. Neighbours spilled out to hear our account of the day.

“Over our midnight feast of cold meat, bread and butter and pots of tea, we filled them in on the long journey and the match. The Dublin team had had a father and son playing; the father was in goal. But it was the deeds of Mick Mackey, Paddy Clohessy, Paddy Scanlan and Mick Cross that brought the smiles to their faces and the shrill of excitement to our voices.

“Our dreams of going to the replay never materialised. Sweeney just shook his head when he surveyed his tyres. Instead, we listened to it on the best radio in the neighbourhood. And Limerick won next time round!”