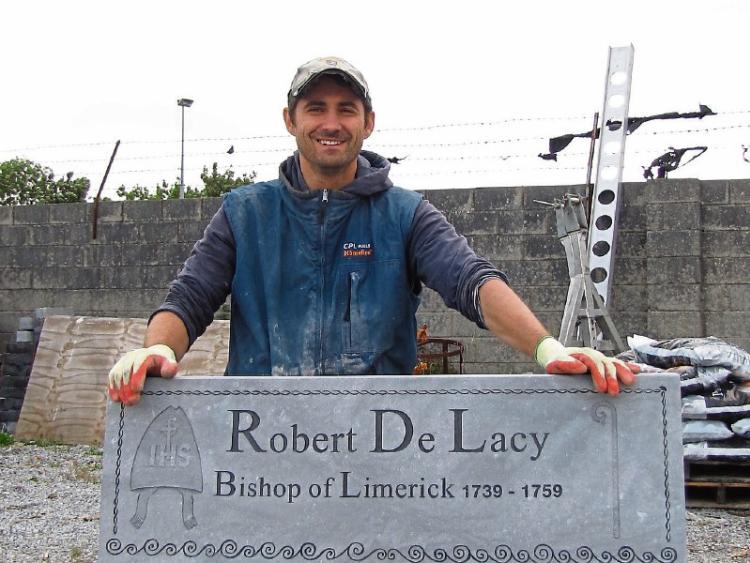 A STREET name in Newcastle West  is a gentle reminder of his life and times  but it is in Ardagh that Bishop Robert De Lacy is best remembered.

Although Bishop of Limerick from 1737 to his death in 1759, he was buried, by his own wish, in the family plot in Ardagh. On Friday, a new memorial stone was unveiled to mark his final resting place in the Norman ruin in the graveyard.

The memorial stone is being put in place by St Kieran’s Heritage Society because, as its secretary, Mary Kury explains, the original gravestone and its inscription has worn away over time and become illegible.

Happily however, the historian of the Diocese of Limerick, John Begley writing in the last century recorded the inscription: “Beneath this stone are deposited the mortal remains of the Right Rev. Dr. Robert De Lacy who was R.C.B. of Limerick 21½ years.  He departed this life Aug 4 1759, R.I.P “

Robert De Lacy was born, one of nine children to Pierce DeLacy and Lady Arabella Gould in Dromadda, Athea. His father rented his estate from the Courtenays in Newcastle West.  As with all aspiring priests during Penal Times, the young Robert had to go abroad to train and be ordained and eventually became superior of the Irish College in Bordeaux.

There, in 1737, he received word of his appointment as Bishop of Limerick. This was no easy appointment. While the 1691 Treaty of Limerick had supposedly secured the rights of Catholics, a series of penal laws affecting Catholics  religiously, politically and economically were in force until they were repealed at the end of the 1700s.

When Fr Robert De Lacy was appointed bishop, there had been no Bishop of Limerick from 1702 to 1720 and no Catholic churches in the city.

The new bishop spent the first year of his new role living with his sister, a Mrs O’Mahony, in Newcastle West. The street where he lived became known as Bóthar an Easpaig, the Bishop’s Road and now known as Bishop Street.

Over this weekend, a series of events will mark  Bishop De Lacy’s life and death. On Friday, there was a Graveyard Mass in Ardagh, followed by the pattern rounds at St Molua’s Well.

On Sunday, there will be a tour of places associated with the bishop. Starting at 12.15 in the church carpark in Ardagh, a bus will take participants to Dromada, where the walk will begin taking people down  Rooska, past the Mass Rock at Ballyine and on to the Old Mill before returning to Ardagh Community Centre for refreshments at 2.30pm.

People who wish to follow the trail by car are very welcome to do so.

These are all free events and people will be very welcome to attend, Ms Kury stressed.

Meanwhile, the St Kieran’s Heritage Society is also working hard in preparing  for the 150th anniversary of the  finding of the Ardagh Chalice.

The celebrations will take place over two weekends in September with a  packed programme.