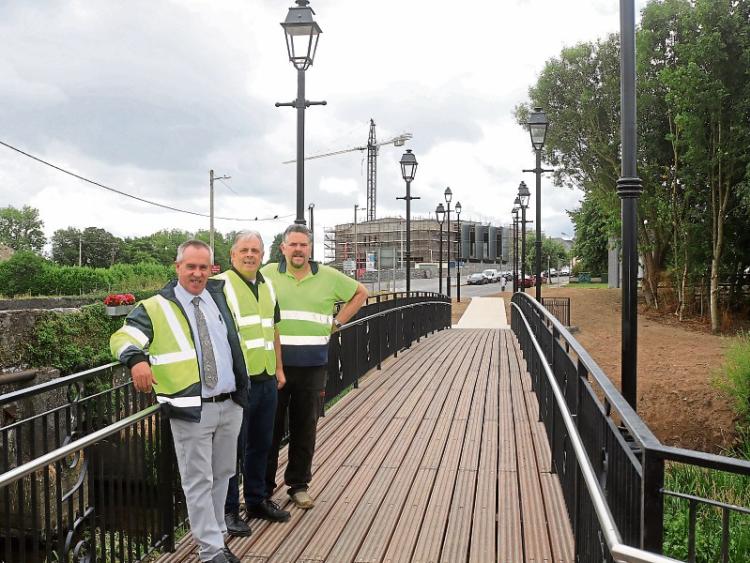 AFTER it was first mooted five years ago the new €247,000 pedestrian bridge over the River Loobagh in Kilmallock has finally been opened to the public.

The first pairs of trainers, flip-flops, work shoes and wedges have traversed the 28 metre-long structure which has been hailed as “a fantastic amenity which is enhancing the arrival experience into the medieval town”.

The bridge links the town of Kilmallock with the recently constructed Riverside walk.

“The bridge provides the public with a new opportunity to view and appreciate the beauty of the River Loobagh as it flows through the town,” explained a spokesperson for Limerick City and County Council.

“It would have started with the residents down in the area contacting me saying the bridge was dangerous for students going up and down to school particularly on Mondays with the mart,” explained Cllr Mike Donegan who put a motion down in 2013 calling for the construction of the bridge.

Health and safety were the prime reasons for the construction of the new bridge which was designed by John Morrissey, consulting engineer and consists of a single span structure with hardwood timber decking and ornamental lights.

“The existing road bridge is only about five and a half metres wide and you have a two-way carriageway and a single pedestrian footpath on the west side,” explained Gerard O’Connor, senior engineer, Limerick City and County Council.

There are plans being finalised to improve the condition of the road bridge.

“The old footpath on the vehicle bridge is now to be removed making the bridge a vehicle only bridge. There is a bit of tidying up work to be done there in terms of the environment. There has to be consideration given to the fish at this time of year especially in terms of the drought and low water. There have already been discussions about landscaping and features,” Cllr Donegan explained.