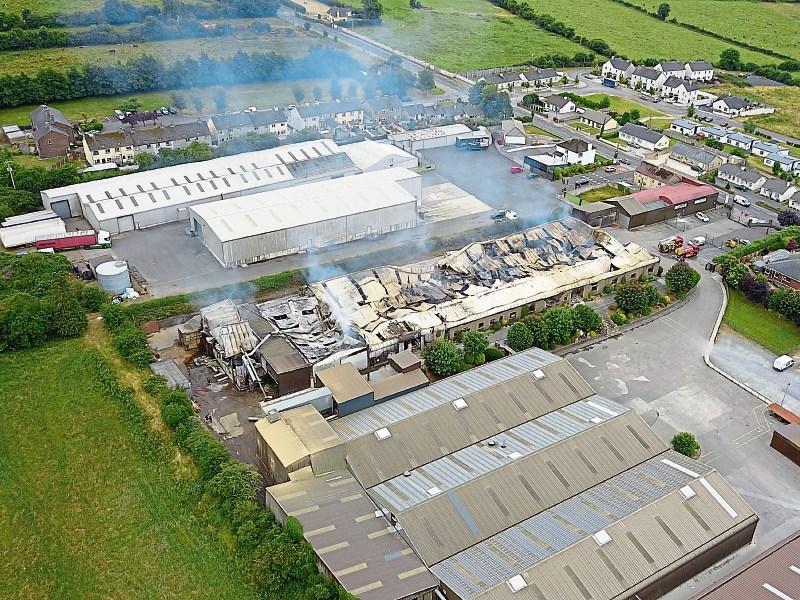 An aerial shot taken by a drone shows the crumpled remains of the building in Ballylanders which burned for over 24 hours. Picture:Jack O'Shea

SMOKE continued to smoulder from the charred remains of the factory in Ballylanders on Monday morning - over 24 hours after a massive inferno took hold.

The blaze broke out at the Galtee Woods factory in the village in the early hours of Sunday morning with the alarm being raised at approximately 2.30am.

Crews from Mitchelstown, Kilmallock, Cappamore, Rathkeale and Tipperary Town were tackling the blaze for all of Sunday.

The Galtee Group expressed their devastation over the loss of offices and some of the wood production facility.

The Ryan family, who own the Galtee Group, issued a statement on Sunday night following the incident.

In the statement, they said: “We are devastated with the loss of our offices and some of our production facility due to a late night fire. This building is also home to a number of other businesses which is equally a major loss for them and the community. We are grateful that no one was hurt and we are deeply indebted to the firemen, staff and local people that helped save the remaining facilities. It is our intention to be back up and producing material for our customers within a few days.”

The cause of the fire has not been established but it’s not believed to have been suspicious.

In the region of 30 people worked in the premises including 25 employees of AB Wood Products Ltd which occupied the majority of the building and a further five employees of another company upstairs.

AB Wood Products Ltd manufactured ready made and bespoke kitchen doors and accessories and wardrobes designed for the Irish and UK markets.

The employers, mostly men aged in their 30 and 40s hailed from Ballylanders, Kilfinane, Mitchelstown, Limerick and Fermoy. The business, the owner Mareks Beide, says was doing very well.

The overall cost of the damage is currently being assessed and is believed to be in excess of €1 million.

Deputy Niall Collins, Fianna Fail, said: "The facotry is a well-known employer in the middle of Ballylanders. Hopefully they will recover and get the established business back up and running and there will be no job losses."

Local councillor Eddie Ryan who lives in the nearby village of Galbally said it was “with great sadness that we woke Sunday morning to the news that the building owned by the Galtee Group Ballylanders was burned down during the night.

“This factory is a major loss to the community of Ballylanders and surrounding areas. The fire service and those employed at the factory worked through the night to prevent any damage to nearby buildings. I admire the resolve of the Ryan family and hope they will be back in production in the very near future. Thankfully there were no casualties.”