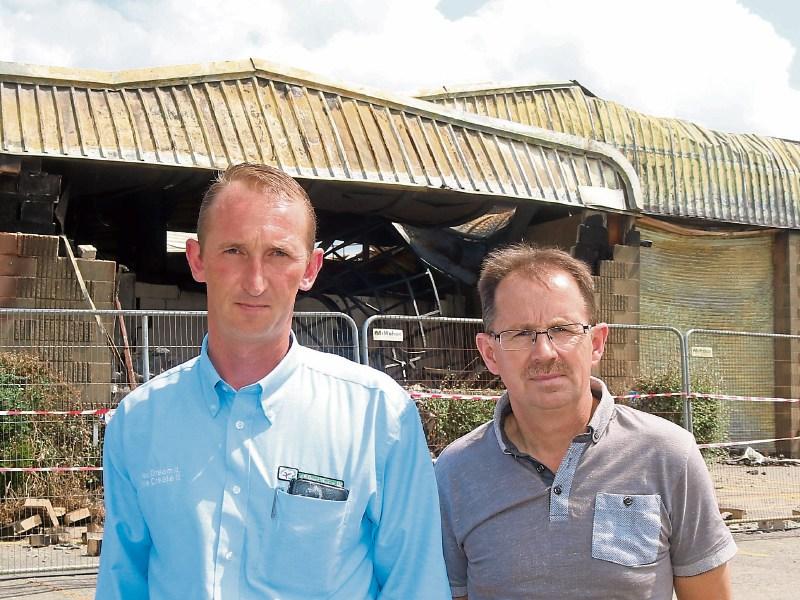 Mareks Beide, owner of AB Wood Products, with business partner Liam O’Connor at the factory, which was destroyed by the fire

THE OWNER of a bespoke kitchen manufacturing business employing 25 people in County Limerick which was burned to the ground in a massive inferno says he feels like “a poor dog on the street with nothing left.”

The blaze broke out at a factory in the village of Ballylanders in the early hours of Sunday morning causing in excess of €1 million in damage and resulting in “a major loss to the local community.”

The cause of the fire has not been established but it’s not believed to have been suspicious.

An aerial shot taken by a drone shows the crumpled remains of the building which burned for over 24 hours. 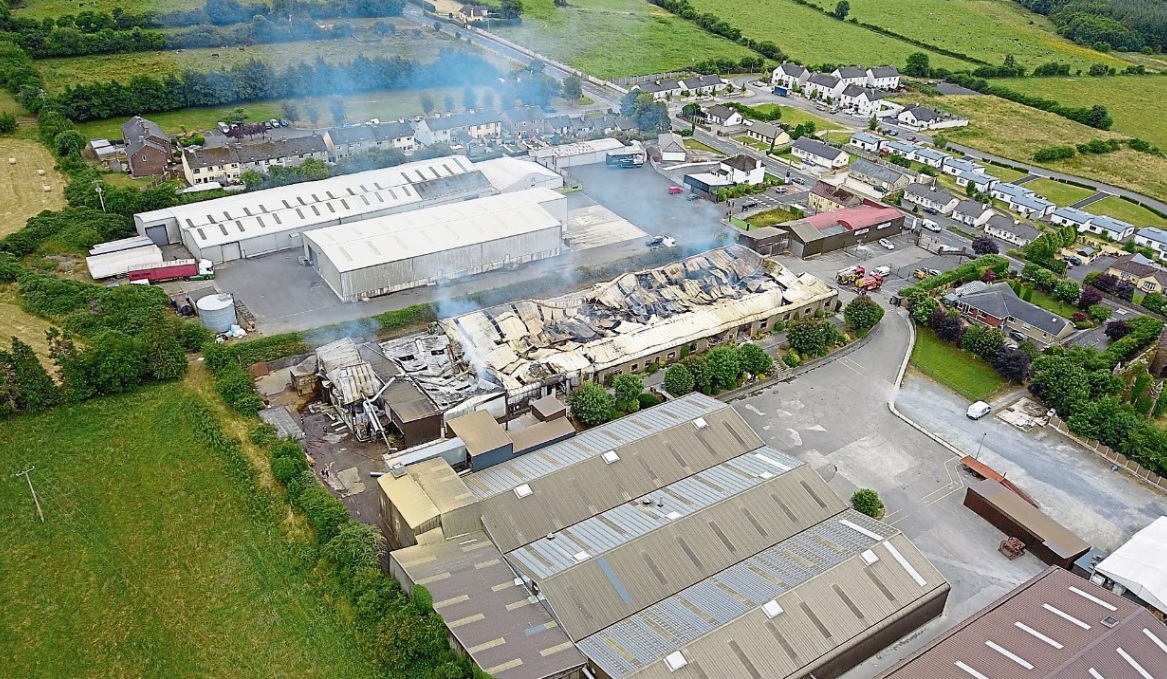 Mareks Beide, 37, the owner and director of AB Wood Products Ltd which occupied the majority of the building received a phone call at 3am on Sunday informing him of the blaze. The alarm was raised at approximately 2.30am.

“One of the managers of Galtee (The Galtee Group) rang me. When I got there everything was burning. I live just five minutes up the road. I felt sad - 17 years of hard work, starting from nothing,” he told the Leader this week.

“I had 25 workers. There were Galtee Groups offices on the side of the building. On the second floor up was another company - sub contractors for Galtee. I would say there was five working with them. I’m like a poor dog on the street - nothing left. Everything is completely gone. I have nothing,” he added.

AB Wood Products Ltd manufactured ready made and bespoke kitchen doors and accessories and wardrobes designed for the Irish and UK markets.

The employers, mostly men aged in their 30 and 40s hailed from Ballylanders, Kilfinane, Mitchelstown, Limerick and Fermoy. The business, Mareks, says was doing very well.

“All the machinery was mine - you are talking over half a million. We are OK with insurance - it’s going to take a long process. We were working two shifts 24 hours.”

Originally from Latvia, Mareks came to Ballylanders in 2001.

“There was a carpentry job in Galtee - I was working for Galtee. Then I started up my own business. In 2010 I was sole trading as AB Kitchens. Then in 2014 I bought Galtee Kitchens' own business. Everything was in the same building so we just made a deal and bought out. We made big progress. I started with two employees and four years later I have 25.”

The overall cost of the damage is currently being assessed and is believed to be in excess of €1 million.

“I’m working on a strategy for the last two days - I have to set up a strategy on how to start again and then I will make my decisions and call a meeting,” said Mareks.

He says if he gets support, he would be confident of restarting.

“If the government help me I can rebuild and start again and pay the bills and keep whoever helped me.

“I told them we can’t do anything at the moment because it is only a few days down. They will get paid whatever they have to get paid but I said I will make my decision when I have the plan in place. I have a big customer support so I’m looking to start again.”

The Galtee Group, which owns the factory, have expressed their devastation over the loss of offices and some of the production facility.

Crews from Mitchelstown, Kilmallock, Cappamore, Rathkeale and Tipperary Town were tackling the blaze into Monday morning.

In their statement the Galtee Group, led by the Ryan family said said: “We are devastated with the loss of our offices and some of our production facility. This building is also home to a number of other businesses which is equally a major loss for them and the community. We are grateful that no one was hurt and we are deeply indebted to the firemen, staff and local people that helped save the remaining facilities. It is our intention to be back up and producing material for our customers within a few days.” See page 5 for more