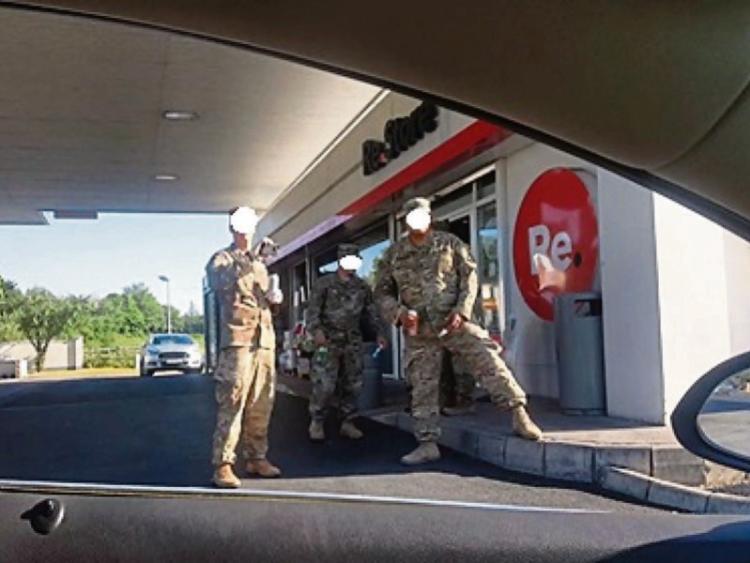 The soldiers pictured at a petrol station in Shannon - outside the airport Picture: Shannonwatch

THE State “raised concerns” with the US Embassy after a number of military personnel were pictured in uniform at a service station in Shannon.

The picture, shared online by the Shannonwatch Facebook page, shows the military personnel in uniform beyond the boundary of Shannon Airport, which they are not permitted to do.

In reply to a parliamentary question by TD Clare Daly, foreign minister Simon Harris confirmed that permission had not been granted for the military personnel to wear their uniforms outside the airport.

“In accordance with the requirements of the Defence Act 1954, express permission was granted by the then Minister for Foreign Affairs in January 2003 to the US authorities to allow for their military personnel wear their uniforms in the transit areas of Irish airports, including Shannon Airport,” he said.

“Further permission must be sought for wearing of uniforms outside these areas. Where permission is granted, conditions under which uniforms may be worn are stipulated by my Department.

“On 26 June 2018, these conditions were not strictly adhered to and my officials raised our concerns about this with the relevant Embassy on 27 June, emphasising the necessity for strict compliance with the criteria as laid down by my Department. My Department has sought, and received, assurances that the Embassy is strengthening its measures to prevent any recurrence.

“My Department receives requests from various States for the wearing of military uniforms for a variety of reasons- attendance at official meetings or functions, diplomatic events, seminars or courses. Where permission is granted, the applicable conditions and restrictions are specified and explained in detail. Issues rarely arise. If they do, my Department takes prompt action to ensure that the need for compliance is fully understood.”

A spokesman for the US Embassy confirmed to the Limerick Leader in a statement: “The U.S. government appreciates and respects the conditions under which aircraft transporting U.S. service members can utilize Shannon airport in accordance with Irish law.

“On June 26, U.S. service members transiting through Shannon visited a nearby convenience store while in uniform. We are addressing this situation and implementing corrective measures to prevent this from happening in the future.”

John Lannon of Shannonwatch claimed that there had been "ongoing breaches of the conditions that have been laid down by the Irish Government for the US military use of Shannon".

"While we don't believe that the US military should be using Shannon Airport at all in the first place, the very least that the government needs to do is (carry out) a full review of their behaviour there," he added.